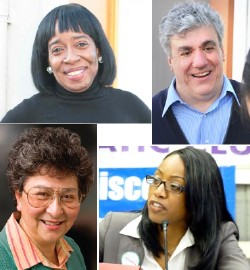 Although some absentee and provisional ballots remain to be counted, the Department of Elections ran its first unofficial Ranked Choice Voting (RCV) tabulation on Friday – to see if we can determine a winner in various Supervisor races. And now it’s become clear that Jane Kim and Scott Wiener have won in Districts 6 and 8, respectively. In District 2, Mark Farrell will likely surpass Janet Reilly when it’s all over – although it’s still too close to call. But the real suspense is in District 10, where the top five candidates are all within 134 votes of each other. Malia Cohen finished ahead of Tony Kelly in the RCV simulation on Friday, but it’s possible that Lynnette Sweet may finish on top in the end. The Department will run a second RCV tabulation tomorrow, but we won’t know until every last vote is counted – including the 1,270 provisional ballots in District 10.

This is the fourth election where San Franciscans use Ranked Choice Voting (RCV) to pick its Board of Supervisors, and it’s clear that voters are still getting used to the new system. Rather than have an expensive run-off in December where voters need to come back again, RCV allows voters to “rank” their top three choices on the November ballot. If no candidate gets a majority of “first-choice” votes, lesser candidates are eliminated and have their “second-” and “third-choice” votes transferred – until we get a winner.

In 95% of elections across the world that use Ranked Choice Voting, the candidate who comes in first before the RCV tabulation wins – which has been the case in every past San Francisco election. And while an RCV tabulation before we finish counting every vote may appear strange to some, the reality has been that – in past elections – the eventual winner was so far ahead that it was possible to determine the results only three days after the Election. But not this year …

In Districts 6 and 8, Jane Kim and Scott Wiener both finished ahead of their challengers in the “first-place” vote totals – and Friday’s initial RCV tabulation sealed their victory. After Theresa Sparks and Rebecca Prozan were eliminated, we learned that their voters had preferred the two front-runners over rivals Debra Walker and Rafael Mandelman. While absentee and provisional ballots remain to be counted in those two districts, it is now mathematically impossible for the outcome to change – and we can call both races.

Will Janet Reilly Suffer the Same Fate as Don Perata?

In District 2, the RCV tabulation on Friday showed Mark Farrell come from behind and defeat front-runner Janet Reilly by a razor-thin margin of 97 votes. While thousands of ballots remain to be counted, odds are in his favor of keeping the lead for two reasons. First, the late absentee votes are trending in his direction. Second, voters who picked the four lesser candidates all preferred Farrell. In the Oakland Mayor’s race, Don Perata may have lost despite getting the highest number of first-place votes for the same reason that Reilly may lose – his rivals coalesced against him, in an “anybody but Perata” strategy.

Ranked Choice Voting is pretty straightforward when you only have three or four major candidates, and when several hundred votes separate each one. But twenty-one people ran for District 10 Supervisor, and the top five finishers are all within 134 votes of each other. While the Elections Department did an initial RCV tabulation on Friday that had Malia Cohen finish on top, it doesn’t necessarily mean she will be the ultimate winner.

In RCV tabulations, there’s a big difference between which candidate ends up in second place – and who comes in third. Because the 3rd place candidate gets eliminated, while the second-place candidate may still win. On Friday, the initial RCV count ultimately came down to Tony Kelly, Malia Cohen and Lynnette Sweet – with Sweet in third-place. Because Sweet’s voters preferred Cohen over Kelly, her voters put Cohen over the top. But if Cohen was in third-place at that point, Sweet would have been the one to benefit.

And when the results are so close, the “ranking” of each candidate can change. In fact, it already did – over the weekend, the Elections Department counted 3,299 more absentee ballots. Marlene Tran, who was in 5th place on Friday, is now in second place – only 26 votes behind Tony Kelly, and 11 votes ahead of Sweet. Does that mean she can win? Not necessarily, but it will likely shift the order of when each person gets eliminated.

Here’s what we know. Looking at the votes that have already been counted, Eric Smith and Chris Jackson voters preferred Tony Kelly – but were also far more likely to favor Malia Cohen over Lynnette Sweet. In contrast, Diane Wesley Smith voters preferred Sweet – and Teresa Duque voters leaned heavily towards Marlene Tran. As each of these candidates get eliminated, “rankings” between Cohen, Sweet, Tran and Kelly can shift.

The best thing going for Malia Cohen right now is DeWitt Lacy – whose voters strongly favored her over anyone else. That’s not much of a surprise, because the SF Democratic Party ranked Lacy as their “first-choice” and Cohen as their “second-choice.” And while Tony Kelly is the most popular pick of Steven Moss and Marlene Tran voters, his margin is not nearly as overwhelming – which allows both Cohen and Sweet to stay competitive.

Ultimately, my prediction is the winner will either be Cohen or Sweet – because the two African-American candidates share more supporters with each other than they do with Kelly. The only question is – after every vote gets counted and the Elections Department runs its final RCV tabulation, which one of the two will “rank” ahead of the other? On Friday, the tabulation showed Malia Cohen ahead – which is why she “won.” But Sweet picked up slightly more absentees than Cohen did over the weekend, so that may change.

We’ll find out more tomorrow – when the Elections Department runs a second unofficial RCV tabulation. Director John Arntz said yesterday they will do a third one on Friday.

In the meantime, campaigns and their supporters are getting anxious. There are still some absentee votes left to count, and the race will come down to the 1,270 provisional ballots in District 10 – 320 in Visitacion Valley, 370 in Potrero Hill and 587 in Bayview Hunters Point. Because they are provisional ballots, the Elections Department will need to check if the voter was properly registered – and if it will be included. State law requires that provisional ballots be “liberally construed,” so that we err on the side of inclusion. In such a close race where every vote will count, these votes need to be included.