Dissipating My Glamours with Ms. Deborah 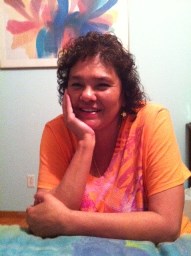 In the physical world, the word “glamour” isn’t necessarily a bad thing. It’s beauty, it’s luxury, and it’s glitz and sparkle. It’s red carpets, movie-stars, and dresses… Okay, I might have the Oscars on in the background as I write this, but you get the point.

As I found out last Thursday night, though, in the spiritual world “glamour” means something very different—it is something negative, something to rid yourself of… kind of like Kelly Rowland’s dress at the Oscars. (Too soon?)

As Ms. Deborah, my Thursday night spiritual guide informed me, glamour is a “fog” or a “mist” that surrounds us to distort reality. These glamours keep us… what did she say…?

These mists and fogs keep people identified with the lower self of imprisoning fears, emotions, desires, and the “not true self” We will use an exercise that calls on the dual light of mind and matter to dissipate glamours in our personal lives and by doing so, we enlighten both ourselves and our planet.

Copied straight from the Meetup page where I found out about this event. Yes, meetup.com is the secret weapon of any good spiritual taste tester—it’s where I found Ms. Deborah’s Thursday event, it’s where I found a group to meditate with on Saturdays, and it’s even where I stumbled upon a group of people who have an equally unhealthy obsession with their Rhodesian Ridgeback dogs. Not exactly a spiritual group; just sayin’.

So here’s how it went down. I showed up at Deborah the Healer’s home and walked through the back gate and to a small studio. It was just getting dark at the time and the studio, all windows, was glowing like a beacon. When I walked in I found a small room filled with what looked like a short massage table covered in a blue blanket with two chairs on either side. I briefly struggled with just where to set myself down—did she want me on the table? Would that be weird? I honestly had no idea what I was getting into here and ultimately opted for one of the chairs. Then I waited for Deborah to make her grand entrance. I was expecting… I don’t know, a cape? Smoke? An explosion?

But no, Deborah just walked in, slid the door closed, and said something deep and profound like, “Hey, how’s it going?”

She sat down across the blue table from me, apparently satisfied with my chair selection, and began explaining to me all about the Ascended Masters in the Universe. For those of you, like me, who have no idea what this means, an Ascended Master is apparently a being that has reached enlightenment but has decided to stick around somewhere in between what we can sense in this reality and Beyond. Why? Not for Godiva chocolate, as you might think, but to help us spiritual seekers along our own paths.

So we closed our eyes. She asked me to please focus my attention on my third eye—the spot just north and in the middle of your two eye eyes—and imagine a ray of light beaming out from my head, like a searchlight. Then she began… chatting with the Ascended Masters. She asked them to please help us rid ourselves of our glamours, to guide us in this process. Then she went through an exercise for each glamour that she felt was blocking me.

Fear of moving on. Check.

With each exercise, she said some words and I repeated them. But I’ll be honest with you, I have no recollection of what we said. It was so odd. I was aware of my mouth moving and some strange noises coming out of said mouth (a.k.a. words), but I wasn’t really aware of what I was saying and couldn’t even recall immediately afterward.

At the end of the exercises she guided me to “turn off the light”—that searchlight we’d lit up in the beginning—and come back to the room. And then we had a nice chat about travelling, Sedona, and fancy hotels.

As I got up to leave, I felt about the same as I had before I got there; perhaps a bit more awake since I kind of felt like I was half asleep during the exercises. But she told me to be very aware over the next week or two. She told me I’d be more receptive, things would be easier, and to be open and watch out for strange synchronicities.

And now it is Sunday—not exactly two weeks later but I wanted to report back to you, dear reader. Just the next day something… odd happened. But I’ll tell you more about that in the next post.

As always, I love to hear from you, so send us feedback below and let me know—what kind of posts would you like more of? Thoughts? Questions? Send me what you got!