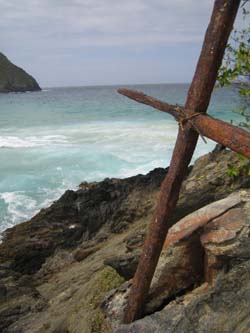 (Ed. Note: Journalist Eli Rosenberg is in Venezuela and will be reporting regularly on his observations for Beyond Chron)

Plunging into the thick air of Maracay, Venezuela, the arriving visitor is greeted simultaneously by both heat and beggars, which serve as the first signs that the city of Mérida, cradled high up in the Andes, has been left far behind. Even the nearly-vacuum sealed bus, removed from the outside world for the duration of the twelve hour ride by an inexhaustible AC system and window shades that remain closed, seems to maintain the feeling of isolation that pervades the Andes. This was the weekend of a huge anti-Chávez rally on the streets of Caracas, and a weekend which Chávez answered with a thunderous speech to counter any and everyone who opposed him.

After waiting in the bus station in Maracay, two hours in an old school bus took me to the small coastal town of Choroní, an almost 400 year-old collection of pastel houses and hotels, situated a few miles inland from the shore of the Caribbean originally to avoid pirates. The lazy beach town, while clearly removed from the political fracas in the capital, remained inextricably linked to the events that unfolded there. Walking back to town from the beach, Chávez’s speech could be heard echoing out of the blaring radios and television sets of vendors, combining with the sounds of waves to form a peculiar soundtrack for this seemingly carefree town.

We stopped to eat at a shack sunken beneath the road, the owner and his wife focusing on Chávez, who speaking and gesturing animatedly, made the small television screen in front of them seem immensely larger. A crowd gathered around the television set to drink beer and watch the spectacle, entranced by the figure in the customary red shirt and beret of the Bolivarian Revolution.

As exemplified by most of his speeches, Chávez maintains the idea that the Bush administration wants to invade Venezuela, and on this day assured the country that a larger and better equipped army was necessary for protection against the United States. Continually evoking struggle of a revolution against imperialism, Chávez demanded that Puerto Rico, Netherlands Antilles, Guadalupe, the Maldives and the Virgen Islands be released from outside control, his voice gaining momentum, crescendoing in outrage as he listed off every island in captivity.

Last week, Chávez specifically demanded to Tony Blair that Great Britain return the Maldives to Argentina, eventually calling Blair who refused, an “imperialist pawn” and telling him to “váyanse largo al cipote,” a phrase roughly translated to “go to hell.” Relations too between Venezuela and the United States have been even more tense than usual as of late with Chávez expelling a US naval attaché, John Correa, over accusations of spying. In response, the United States dismissed a high-ranking Venezuelan diplomat in Washington, Jeny Figueredo, a blatant indication that any move from Venezuela would be countered with greater intensity from Washington. Unlike Correa, Figueredo has not been accused of any wrongdoing and upon return to Venezuela was promptly promoted to a deputy minister position to Europe.

For someone who has never seen Hugo Chávez speak I would highly recommend watching him, regardless of feelings for him or even knowledge of Spanish. The conviction which he exudes, the fury with which he utters every word, and the sight of a politician so possessed by what they believe in is enough to send chills up anyone’s spine whether you understand the words he says or not.

Personally, I cannot remember the leader of another country who has spoken in this manner, so completely engulfed in what they believe, and wielding of such immense power with speech. It is this power that causes some to label him as a demagogue, this sheer dynamism causes others to attach all their hopes to him and it is exactly this force that both motivates and infuriates; this is the reason why he is such a polarizing figure that has simultaneously united and divided the people of this country for and against him and his fiercely nationalistic Bolivarian Revolution.

As the sun sunk beneath the hills to reveal a balmy and absolutely tranquil evening, Chávez continued to burn on feverishly. Eventually we sauntered back in to town and sat down on the malécon, the old wharf surrounding the port. The coastal region of Venezuela maintains a distinctly different vibe. Skin tones are more varied on the coast, the much increased African influence is visible in both the people and the culture.

The malécon, its rusted canons staring blankly at the sea, came alive at night. Around midnight two men, each carrying enormous drums made out of hollowed-out tree trunks, walked up to the pier and sat each horizontally under the statue of a watching saint. Straddling the drums, the men lit a fire to warm up the hide, and an older man arrived, sitting down on one to begin drumming on the wooden side of the other. As the drumming picked up, a man emerged from the group of people circling the drums, bottle of rum in one hand, chanting, dancing and beckoning the incipient crowd to join in, occasionally stumbling down back into the surrounding circle, staring upward as if possessed by the saint that loomed above him. This began what is referred to in Venezuela as Tambores, literally translated as “drums”, a furious marathon of drumming, dancing, drinking, praising and chanting, raw and organic, voices and hands, wood and skin, Venezuelan, African and Catholic all at once.

The next day, fourteen hours and two buses took us back to Mérida. Sunburned and exhausted, I crashed instantly upon arriving home, slightly relieved to be back to the cool air and mellow vibe of the Andes, yet already planning a return to the coast.