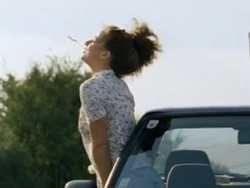 Slamdance kicks off its 18th festival at Park City, Utah, with Natalie Neal’s short film “Rose and Sophia.” The titular characters are two adolescent girls living in Nowheresville, Suburbia. The film is less a plot-driven piece than a set of vignettes capturing what seems to these two girls like precious moments of their summer vacation. Neal depicts trying on a mother’s sandals or stealing a rival’s digital camera in both their triviality and the personally meaningful moments that they are.

The actresses playing the lead characters display an appealing amount of tempered naivete. Even when they promise each other that their childhood friendship will last forever, one can sense both the hopefulness and the emptiness behind those words. Supplemented by occasionally amazing images such as one of a double rainbow, Neal’s short provides an entertaining festival start.

Kristina Nikolova’s feature film “Faith, Love, and Whiskey” provides a pretty take on the love triangle story. Two poles of this triangle are provided by two social and economic opposites. One man is Scott, a well-to-do New York City-based yuppie. The other is Val, an unemployed hard-living Bulgarian. Connecting the two men is Neli, the Bulgarian woman who is both Scott’s fiancée and Val’s supposedly former lover. The young woman is quietly dissatisfied with her promised Cinderella life with Scott. When Neli takes a sudden trip to her Bulgarian hometown, her reconnection with Val brings up both the joys of her old love and the sacrifices she may need to make to have a future.

Nikolova understands that the love triangle story at its best can be a character study of personal value systems. Neli’s American life may be prosperous and safe, but its distance from everyday struggle makes hiding a cigarette pack the height of edgy rebellion. The Bulgarian woman’s life in her old country may have been filled with exciting drinking and sex, yet one can’t shake the impression of her party hard life denying the zero prospects of her impoverished country.

By contrast, Derek Franson’s “Comforting Skin” fails to imbue its macabre premise with any degree of freshness. Lonely and plain Coffee decides to address her sexual frustration by getting a tattoo. When the skin drawing appears to come to life, it acts as confidante and even lover to the lonely woman. But is the tattoo truly alive or a deadly manifestation of Coffee’s old mental instability?

It’s fortunate Franson’s film delivers only time eating visuals and tedious plotting. Had better craft been displayed, its sexually regressive political message of women needing male attention to find emotional fulfillment would be more obnoxious than it already is. A last act attempt to inject a “shocking lesbian twist” merely comes across as tiresome male titillation.

For a character who’s intended to display a rainbow palette of emotions, it’s embarrassing to note Victoria Bidewell’s performance as Coffee can only be described as grey. There is no sense of emotional desperation or possession of the background written for her. If Coffee was ever a married artist’s lover, personal self-delusion probably played a large part in the relationship.

Shaun Parker attempts to salvage his crappy early work in his short “Hope. You Like Crap.” A short film made twenty years ago about a depressed and suicidal student becomes grist for Parker’s attempt at ruefully funny commentary. However, the end result fails to approach the quality of Riff Trax’ worst humorous film one-liners. His commentary never achieves even a reasonable degree of witty self-flagellation.

Andrew Edison attempts a bad taste high school sex comedy in his feature “Bindlestiffs.” The cherry-losing hopefuls are three high school boys suspended for several days from school thanks to a bogus graffiti charge. The boys’ nemesis is a paranoid school security guard convinced the trio somehow plans to commit a Columbine-style shooting.

“Bindlestiffs”’ belief in its edginess is one not shared by a reasonably discerning viewer. Its semi-improvised plot structure never takes its characters to emotionally chaotic territory. In a post-“Brokeback Mountain” world, performing a gay blow job for drugs is edgy only to those who don’t get out much. Nor does “Bindlestiffs”’ visual staging inject even a modicum of energy into its tired scenarios. Readers are better advised to check out old “South Park” episodes instead.

Canada’’s official entry to the Academy Awards Foreign Film list is Philippe Falardeau’s “Monsieur Lazhar.” The titular character, Bachir Lazhar, is a substitute teacher who takes over a traumatized classroom after its previous teacher commits suicide. Over time, both teacher and class form a bond and find the strength to grapple with individual personal tragedies.

Falardeau’s film sparkles with its lead performances. Lazhar’s quiet dignity and traditionalism may be conveyed by any half-decent actor. But Mohamed Fellag’s performance makes those qualities a mask for someone trying to soldier on in the face of emotionally crippling losses. When the viewer sees the small ways he drops his mask (e.g. dancing along to a party’s music), they realize how symbolic the teaching position is to Lazhar’s personal healing. Sophie Nelisse’s Alice could have coasted on her wonderfully angelic face. But she gives her character palpable emotional strength and the vulnerability that makes her treat Lazhar as a necessary father figure.

“Monsieur Lazhar”’s treatment of more serious issues reveals its shortcomings. Saying Lazhar likes Balzac feels like a sop to quell viewer fears regarding Canada’s assimilation of Middle Eastern immigrants. The film raises the possibility that personal stresses from being hobbled by paranoid anti-child molestation rules caused the teacher’s suicide. However, it contents itself with reducing its criticism of those rules to a workplace hassle.

“Monsieur Lazhar” may be warm and pleasant. But significant or memorable it isn’t.