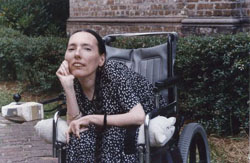 Disability and human rights activist Harriet McBryde Johnson died at her home in South Carolina on June 3. The world has lost a passionate and dedicated advocate for social change. Untold numbers in the disability community and beyond have lost a caring friend and role model. Johnson was a civil rights lawyer, a weaver of tales, and a spokesperson for the dignity and humanity of people with disabilities. Her articles and essays for the New York Times, including a Sunday magazine cover piece, thrust Harriet onto the national stage. She wrote passionately and with humor about a quite serious topic: her right and the rights of others, to exist in the world as a person with a disability. Her withering critique of those who would deny her existence was delivered with a calm and open-hearted voice, and her generosity of spirit was evident always.

On the quotation-finding website thinkexist.com, there is only one quote from Harriet, despite the abundance of her words of wisdom. She is quoted as saying “Death is natural and necessary, but not just. It is a random force of nature; survival is equally accidental. Each loss is an occasion to remember that survival is a gift.” Through her activism, political commitment, and personal connections, Harriet left no doubt that her gift will be deeply missed.

Beyond Chron reviewed Johnson’s memoirs in 2006. The book captured Harriet’s unique blend of humor, serious activism, and front-porch story telling, and it would be a fitting tribute for every activist to read this book. The memoir is titled “Too Late to Die Young.” But despite a productive life on many, many levels, it turns out the title was wrong. Harriet’s death at age 50 comes far to soon for a world that still desperately needs her.