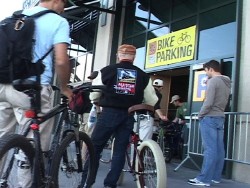 We all understand the benefits and the need for multi-modality. However, that said, there is a massive gap between that understanding and appropriate real-life behavior. Somehow, city agencies — whether SFPD, DPT, the MTA Board of Directors, City Attorney, Bd. of Supes. or ??? all interpret the need to promote alternate forms of transportation as a “hands-off” policy with regard to addressing the various safety problems caused by bicyclists.

Take, for example, something as seemingly mundane as bike parking. The recent lawsuit that stopped all work on implementing the bike plan has allowed bicyclists another excuse to ignore the safety of others. Since bike racks aren’t being constructed, it’s become open season to chain them to MUNI platforms and even hand rails on ramps.

Recently, I noticed bicycles chained to the hand rails along a designated disabled access ramp at UCSF’s Parnassus Campus. Yes, people at an institution dedicated to training future health care providers ignored the needs of people with mobility and balance problems. Makes you wonder what else these health professionals overlook–and what other gaps in responsibility they indulge in.

Anyone who needs to use those hand rails would have had to detour around the bikes chained in the path-of-travel — making for an unsteady, wobbly, and unsafe passage for the disabled. Despite this obvious hazard, nobody at UCSF seems to know what to do. There’s no signage on hand-rails telling bicyclists the obvious — stay off.

But, that unresponsiveness flows from the continuing practice by all city agencies not to require signs on various railings to not chain bikes to these rails. Bicycles often are chained to the rails at MUNI streetcar platforms on Church & Market, on Market & 9th St., at various stations in the South Beach platforms served by both the “T” and the “, at the SF State stop for the “”M” car, and various other streetcar platforms.

MTA management and the MTA board of Directors was informed of this problem late in the summer of 2008. In the 9 months since then, what’s been the result? Zilch; Zip; Zero—all of which sounds suspiciously something like the sound one makes when snoozing–“zzzz”.

No action; no signs; no leafletting campaign.

Is that an appropriate response for “The City That Knows How”? To be asleep at the wheel?

Is that what we should expect in a city that often touts it has nationwide searches for department heads–that “the best and the brightest” do NOTHING?

Further, within the array of bicycle-oriented groups and advocates, nobody there has taken the lead on this safety issue.

The Bicycle Advisory Committee, a CAC to the Board of Supes., hasn’t gotten any request from any Supes. to pursue this. The SF Bicycle Coalition makes the plausible analogy that, just as AAA is not responsible for the actions of all drivers, so the SFBC isn’t responsible for bad bicyclists.

There’s also no city official — whether elected, appointed, or hired — supporting consistent and effective enforcement against bicyclists who blow through stop signs, stop lights, crosswalks, and ride on sidewalks.

When these problems are brought to officialdom, EVERYONE ducks or comes up with an excuse. What does silence, evasion, and finger-pointing say about the character of all involved? It’s very much like the response from the Critical Mass people–no one is in charge. When no one is in charge, there’s no responsibility.

We more and more hear how politically powerful bicyclists are in SF — “10,00 members strong” is the tag line from one group.

While that can be taken as an indication of political strength, it also can be viewed as a political threat — anyone who wants to be elected to office knows to vote for whatever bicyclists want and to keep hands off from interfering with their activities.

Somehow, inspirational stories in JFK’s “Profiles in Courage” are lost to this generation of city officials. Doing the right thing, even in the face of likely political hazard, just is not done. Instead, candidates for elective office — whether for Supervisor, Mayor, City Attorney, State Assembly, State Senate, Democratic Central Committee — all prate their support for bicycle power.

However, who among them ever, ever talks about bicyclists’ responsibility?

Who, then, protects the rights of people with disabilities and seniors, when bicyclists do whatever they choose?

Any wonder why people with disabilities file–and win–so many lawsuits against the city, when the city is run by biased and duty-shirking officials?