Disability Perspective: MTA’s Board of Directors 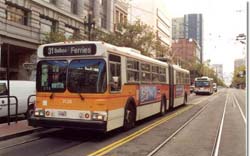 Non-Political, As Required? Or Mayoral Loyalists?

There is much anger, legitimately, about the MTA budget. Transit-dependent riders feel the fare hikes and service cuts are too much and too abrupt, yet car drivers feel they are being penalized for driving.

But let’s not focus on the magnitude of the changes; that’s obviously a FUBAR situation. Instead, focus on the failures by the MTA Board — failures which may be a basis for a future ballot measure, or even Ethics complaints.

The MTA was supposedly separated from city government by a ballot measure developed by various advocates who style themselves as knowledgeable and even “visionary.” This was done so the Directors could concentrate on transportation — to develop a professionalism in their policy thinking. Period.

Not thinking about personal candidacies or how to help fund other departments deficits through work orders.

“Supposedly” is the key word here. During the recent budget decisions, did the MTA Board of Directors take an independent view of their responsibilities, or did they follow the dictates of a city government official — the Mayor?

After dutifully passing a budget along to the Mayor to meet the 1 May deadline, we haven’t heard since about any involvement by the MTA Board of Directors in the recent negotiations about revisions suggested by the Board of Supes.

Instead, we hear stories and statements about the involvement of the Mayor’s Chief of Staff in negotiating on the MTA budget.

If MTA were truly independent of city government, why would any staffer for ANY elected official — whether Mayor or City Attorney or Supervisor or Treasurer or ???? be speaking for MTA? And, why wouldn’t MTA legitimately be a 3rd party in discussion with the Board of Supes. and the Mayor?

For the MTA Board and the MTA Director of Transportation to allow the staff of an elected official to speak for them and even to negotiate for them seems verging close to abrogating their duty to be independent of city government.

Ooops! Did I earlier imply “politics” was a factor? The fact the MTA hasn’t really fought the outrageously inflated “work orders” does allow one to think that preserving the fiction of a city-wide balanced budget is more important than doing their duty to transportation.

That opens the door for a mention of other ways they MTA board didn’t do their duty to transportation.

The elimination of any line understandably upsets those riders. WHICH lines were eliminated doesn’t show that the MTA staff and the MTA board of Directors looked at the civil rights implications of those cuts. Was there any Title VI analysis done about the disproportionate impact on disadvantaged constituencies? We haven’t heard of it.

Some Supervisors notice that elimination of lines such as the 67 cut off low-income presidents in subsidized housing from easy access to transit lines that access necessary services–such as supermarkets.

Fair enough. But, there’s an even more egregious example of failure to do their duty–the elimination of the 89 line that is a shuttle between Forest Hill Station and the Laguna Honda rehab. Hospital. By definition,all residents at LHH have a disability.

So? The 89-line has long been a MUNI route that allows residents of LHH to travel independently; it also allows family members and friends–many of who are seniors or have a disability–to visit. And, it allows LHH staff to take transit to and from work, rather than drive. The 89 line is a part of MUNI’s route structure, meaning one pays ONE fare or uses a Fast Pass to ride it AND the rest of the MUNI system.

It’s worth quoting the MUNI document distributed at the 15 May Mayor’s Disability Council meeting:

“Alternative Service: LHH to take over responsibility for providing service.”

Then, in a MayDay e-mail from an MTA staffer working on MUNI improvements, there’s an indication that there’s NO definite commitment from DPH, let alone FUNDING, to provide this alternative service.

Remember, DPH has already cut tens of millions of dollars from its budget, and now has to cut more. SO, where will the money come from?

The answer seems to be: Believe real hard, and it will happen.

Apart from the funding, though, there’s government issues still at work here.

How can MTA decide that DPH absolutely will take over 89 line service?
And force DPH to commit its scarce funds to run a MUNI route?
Doesn’t that mean a non-governmental agency [ MTA ] is telling a local government department [ DPH ] what to do?

Isn’t that plausibly a violation of the charter amendment separating MTA from city government? Yet, the MTA board of directors didn’t recognize this as a procedural problem.

Another unanswered question from my earlier query about 89-line service is whether TWU operators will staff this service. There is a requirement that any MUNI route be served by TWU operators. Even if DPH takes over the service, it’s still the same route as the 89-line. And, MTA staff didn’t address that factor. SO, the MTA board missed that also.

Finally, since the 89-line is a part of the MUNI route structure, one pays only one fare. If DPH-LHH takes it over, would one have to pay a separate fare to take this shuttle? That would make it even more expensive for the LHH residents and their family and friends to travel back-and-forth?

Or, would LHH provide this service FREE to passengers, as some think is being discussed? Yet, with another multi-million dollar deficit to be addressed, how can DPH-LHH provide any new FREE transportation service?

Yet, the 89-line has CITYWIDE impact, meaning ALL Supervisors of all eleven districts will have constituents left stranded or having to pay extra money to go back-and-forth between LHH and Forest Hill Station.

A lot of factors and government procedural issues that the MTA board somehow missed–making one wonder how much they read their material and then use their supposed transit knowledge to analyze the options and limitations.

Or, do they just do what the Mayor who appointed them tells them fits in with his plans?

Maybe it’s time for another ballot measure about MTA governance?