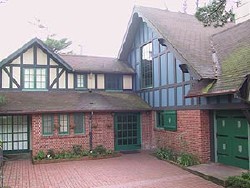 Last year, I wrote a column pointing out that many groups have holiday parties, including fund-raising pitches, at inaccessible spots and that these groups can be influential enough to warrant attendance by various public officials — elected and appointed.

Let’s take a look at one such venue — the Forest Hill Clubhouse, at 381 Magellan. Not only is it not accessible, but it is not even transit-accessible, according to MUNI distance standards.

That’s a LONG distance to walk, wheel, or hobble for anyone who is disabled. Then, to find that the Forest Hill Clubhouse is not accessible adds insult to fatigue.

Why is it that a spot such as this, that is both inaccessible and remote from MUNI, could be so popular? Does the inaccessibility and lack of transit access help with keeping the poor, the transit-dependent, and people with disabilities away? Is there some form of class and disability exclusion process working here?

Yet, looking again at this same holiday party brochure, we see this same group implying many powerful supporters — by listing all those officials — elected and appointed — who have been invited. [N.B.: Many from this list have been listed in the past and have attended previous holiday parties of this group at the Forest Hill Clubhouse.]

What would induce listing all four state legislators and “representatives of SF MUNI [ sic], PUC, Recreation and Parks Department, Transbay Joint Powers Authority, BART …” and then also list advocacy groups, all to be so prominently mentioned in an invite?

Is it that this group is also influential within the Democratic Party County Central Committee?

Does the focus on the past and inability to respond to accommodations in the present mean this group doesn’t want to face a “tomorrow” in San Francisco where inaccessibility is as offensive as are groups that exclude people by reason of race, ethnicity, gender, sexual orientation, or religion?

It’s also worth noting that many of the advocacy groups regularly listed as invited still do not do any outreach to nor solicit board membership from amongst leaders of the disability or senior advocacy groups.

Yet, last year’s column didn’t deter anyone from attending, or even commenting about the lack of accessibility.

So, maybe it’s worth asking any and all sorts of bloggers, paparazzi, free-lance photographers, reporters, and idealistic advocates to show up at the Forest Hill Clubhouse, WITH cameras, on Wednesday, 9 December, between 5:30pm and 9 pm.

Would all these public officials — elected or appointed — and all the invited advocates still walk in if they were being photographed? Would they put coats over their heads in an attempt to hide their identities? Or would it all be seen as part of “politics” in San Francisco — supporting groups that exclude people with disabilities, the poor, and the transit-dependent?