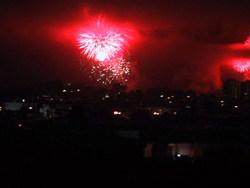 MTA, through both MUNI and DPT, made–and then failed to communicate–traffic control decisions that systematically excluded people with disabilities from taking public transit to the Aquatic Park site for the 4th of July celebrations. This also resulted in a substantial exclusion of people with disabilities from actually getting down to Aquatic Park.

* the # 19 bus was prevented from going to its terminal at Aquatic Park by being short-looped to end its runs, after 3pm, at Greenwich. NO announcement was made to passengers until the end of this short-looping. No change was made in the bus destination sign nor in the internal DVAS system. This let passengers out SIX blocks south of its Aquatic Park terminal, on a sidewalk path-of-travel that would have required going down hills too steep to be code-compliant if they were a ramp.

When queried, no MUNI operator knew of any alternative transit option for passengers with disabilities.

Those operators also knew of no alternative transit option for passengers with disabilities.

* The # 30 trolley bus was diverted onto Union and then short-looped along Van Ness to turn west on Chestnut, bypassing the Northpoint section of the route.

* The # 10 and the # 47 busses also were prevented from travelling along Northpoint.

The people who planned, or who implemented, or who were responsible for communicating this traffic control plan showed no responsiveness whatsoever in providing for a transit service down to Aquatic Park for those who couldn’t get down the steep sidewalks.

It’s a distressing side note that needs be stressed that all these lines and services and all the equipment operating to provide this service were fully accessible in having a “kneeling” capacity, in having a wheelchair lift, and in having a DVAS system that would call out stops for those who can’t see or read street signs.

That MUNI used fully accessible transit equipment and yet denied transit access to Aquatic Park shows a systematic bias against accommodating people with disabilities in getting to Aquatic Park.

Further, in the off-chance there was some special transit access for people with disabilities that I might not have been aware of, I checked the crowd down at Aquatic Park–both in the 3:30 to 4 pm timeframe and again between 7:15 and 7:45 pm. In the afternoon walk-through, NOT ONE person with a wheelchair or walker or 3-wheeled scooter or guide dog or white cane was evident anywhere in the Aquatic Park area during my meandering walk-through.

IN the 7:15 to 7:45 pm walk-through, I noticed ONE–and only ONE–person in an electric mobility device. I inquired how that person got down to Aquatic Park. It was NOT by transit; instead, that person wheeled along through the flat portion of the Fisherman’s Wharf Streets, approaching the Aquatic Park area from the east. I did not see anyone with a guide dog or a white cane during this early evening walk-through.

ONE person with a disability, out of hundreds of thousands of all the people present in the city for the 4th of July, is such a minuscule statistic as to be beyond the laws of probability that ALL people with disabilities in the city somehow spontaneously decided not to try to go to Aquatic Park for the 4th of July celebration. There is statistical basis to conclude that people with disabilities were turned back by the MTA’s denial of transit access to Aquatic Park.

MTA, through MUNI and DPT, developed and implemented a traffic control plan that substantially excluded people with disabilities from being able to get to the 4th of July celebrations at Aquatic Park.

Since MOD has no formal ability to discipline nor fine the various MTA miscreants, I ask MOD to consider the following:

1] Urge, if not require, that ALL the various MTA employees involved in this disability-biased plan, up to and including MTA DIr. of Transportation Nathaniel Ford, take appropriate sensitivity training.

In case MTA cries “poor-mouth” about being able to afford any costs for such training, I ask MOD to consider asking the MTA employees responsible for this failure to include the disabled in their thinking and planning to themselves contribute towards any cost of this sensitivity training. Since these various MTA employees failed to perform their jobs professionally and appropriately by excluding people with disabilities from this plan, contributing towards funding any sensitivity training could be done in lieu of any fines or demotions in rank that might be considered for such violations.

2] Ask MTA Dir. of Transportation Nathaniel Ford to consider re-evaluating the employees involved, both as to properly performing their jobs and to whether their job description needs re-writing or updating.

3] Ask ISCOTT not to approve any more street closure projects that also involve re-routing of MUNI transit until and unless there is in place a plan on how to accommodate, and how to publicize that accommodation to, the transit needs of people with disabilities when MUNI transit is re-routed.