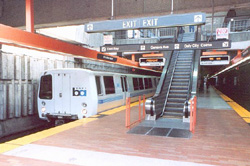 This Tuesday, 28 February, the MTA board of directors likely will again go through the motions of approving a biased contract with BART, while no one at City Hall pays attention. Why? Maybe because it’s only the disabled who are complaining.

Though MUNI and BART officials, and even some on the 2nd floor at City Hall, are long-familiar with the bias they regularly show in a contract up for approval this Tuesday, maybe this new audience of Beyond Chron can get the attention of so many officials who stick their heads in the sand.

Since early in the 1980s, MUNI gave up on buying and staffing enough busses to serve the Mission corridor’s potential passenger load. Instead, they came up with the idea of contracting with BART to accept Adult [only] Fast Passes for riding BART solely within SF–the theory being that BART’s San Francisco route closely-enough paralleled the Mission corridor that BART’s excess capacity could handle the influx of MUNI passengers. Certainly, a creative service approach; BUT, both BART and MUNI have been ducking ever since how this discriminates against those who use the Youth, the Senior, or the Disabled MUNI Fast Passes.

Though these three groups here in San Francisco are disproportionately transit-dependent, and often also low-income, the idea of serving those who need transit and who can’t afford to drive hasn’t affected the contract or the thinking of any side. There’s been only hand-wringing and deceptive responses by BART and MUNI management and policymakers. Consistently, the answer has been either:

These are the types of excuses parents hear from kids in the primary
grades.

Here’s a reasoned response, stripped of baffle-gab, excuse-mongering, and posturing.

VALUE–For the user of the Adult Fast Pass, there is no change in ability to use it any day of the month. One flat fee gets unlimited use throughout SF during that month. One could even use it 50 times on the last day of the month! Not so with the other three passes. Not only do they have absolutely NO use-value on BART, but using the discounted BART tickets always takes away value with each use. There are various ways to calculate the math on this. For a senior to ride BART the same number of times a month that the average Adult Fast Pass user does means at least 2 green-colored BART tickets would be used each month. The Adult Fast pass-user doesn’t have to buy 3 Adult Fast passes each month for; but the senior, the youth, and the person with a disability does.

This also means the Adult Fast Pass user has to only keep track of one fare-instrument during any one month, while the youth, the senior, or the person with a disability has to juggle four tickets and keep measuring their remaining value. Extra work for those limited in income and mobility; not a problem for BART or MUNI.

Proportionately, the value of rides used by these three groups to ride BART in SF at the same frequency as Adult Fast-pass riders could be as much as $72.00, while the value of an Adult Fast Pass is only 2/3 of that figure.

1] Maybe current faregates can only handle two types of tickets. SO WHAT? This issue has been raised, on and off, for over a decade. BART’s silence on this lets people think there has been no change in technology since then. BART certainly hasn’t done anything to solve the bias; rather, BART continues to develop new excuses why NOT to do anything.

2] BART Faregates can handle only two types of tickets and not 4 or 5. Again, SO WHAT? BART has multiple faregates at each entrance. When pointed out that one machine could be coded to handle ticket types 1 and 2, while another ticket machine could be coded to handle ticket types 3 and 4, guess what’s BART’s response? At various times, it’s either SILENCE or a claim they need up to $200,00 to re-code the machines’ software. They’re spending immense amounts of money for accessible fare gates, accessible ticket vending machines, and rehabbing both BART cars and stations; yet the amount of money needed to re-code faregates is somehow beyond their reach?

MUNI isn’t free from responsibility for this long-standing bias. MUNI has done nothing to press BART to change. BART never wanted this contract, calculating it loses money on each Fast Pass user who rides BART within SF. MUNI doesn’t want to press BART too hard, lest the contract get cancelled. Think of the congestion, ESPECIALLY during rush hours, in SF if people couldn’t use their Adult Fast Passes on BART. While many might try to take MUNI, many also might drive.

For both systems, this contract is an example of what was contemplated in the drafting of the US Constitution–a tyranny of the majority. Those who work for BART and MUNI and on the 2nd floor at City Hall are disproportionately able-bodied and not seniors. They are looking at this contract from that perspective–serving people like themselves. The thinking is that, since a majority of BART users within SF are adults, then the contract is tailored to their needs.

As for the three remaining groups of Fast Pass users,
1] Youth Fast Pass users are too young to vote;
2] People with disabilities still don’t register to vote and also don’t vote in proportion to their percentage of the population, partly because the voting systems STILL are not properly and fully accessible;
3] Seniors vote far out of proportion to their percentage of the population, but seniors’ services are under such budgetary pressure that staff and advocates from seniors-serving agencies don’t see this as important as other issues. By doing this every year, though, the slighting of seniors also gets downplayed by those same groups and advocates.

Result?? Same old, same old. Those who have, get. Those who don’t have, don’t get.

It may be worth noting that, while many other constituencies in SF are perceived as powerful enough, in votes or in campaign contributions, for Supervisors to feel they need to develop an “agenda” of some legislation to benefit those powerful groups, not so for the disabled. More than one [so-called] “progressive” Supe. looks befuddled when asked about, or even gets a suggestion to develop, a “disabled agenda”. Supes. have or are now having kids–and so look to promoting services for kids; Supes, also hope to grow old enough to be a seniors–and do recognize their vote potential. Supes, however, do NOT contemplate developing a disability. It may be a case of out-of-sight, out-of-mind, as to why there’s no glut of legislation responding to the many unmet needs of San Franciscans with disabilities.