Did the Occupy Movement Actually Happen? 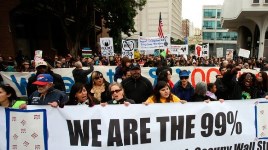 In the fall of 2011, millions of Americans were drawn to a movement directly challenging dramatically rising income inequality. The Occupy Movement dominated public discourse and put economic unfairness at the center of policy debates. Yet only two years after Occupy began on Wall Street, efforts to redress still worsening income inequality have stalled. The national grassroots campaign to get House Republicans to enact immigration reform has not been matched by similar efforts to raise the minimum wage or end corporate tax loopholes, with advocacy for such policies no stronger today than before Occupy’s emergence. We even face the prospect of President Obama selecting Lawrence Summers, a longtime backer of the 1%, as the new head of the Federal Reserve. Are activists preoccupied with other issues, or have people decided that challenging the power of the 1% is not a winnable political fight?

This past weekend I came across two documentaries about dramatic wealth inequality in the United States: Alex Gibney’s November 2012, Park Avenue: Money, Power & the American Dream and Inequality for All, a film about Robert Reich’s critique of inequality that opens on September 27. These films join others on this topic, and while it’s always good to see outrageous economic inequality exposed, my chief reaction was: why after Occupy are we still “exposing” the problem instead of doing something about it?

Clearly, it’s easier to depict gross inequality than to change it. But Americans already know that the rich are getting richer at everyone else’s expense.

Incredible as it seems in the wake of Occupy, until the fast food worker strikes that recently hit sixty cities there were no mass mobilizing efforts pushing to change this troubling wealth dynamic.

These strikes, along with the movement to raise the federal minimum wage, are addressing the nation’s striking inequality. And should these efforts grow, they will make a tremendous difference in reducing economic unfairness.

But it will not be easy. Whereas Occupy’s emergence made economic inequality a daily news story, reports on fast food protests and the inadequate minimum wage are episodic. And as demonstrated by the media virtually abandoning coverage of widespread homelessness in the United States—its persistence means it is no longer “news”—low-paid fast food workers face a challenge of creating ongoing “breaking news” events to keep the media’s attention.

Occupy’s critique went far beyond the plight of low-wage workers, and its other targets—corporate tax loopholes, anti-worker trade agreements, the ongoing power of big banks and financial institutions— are still not subject to mass grassroots pressure in the United States.

That seems like a missed opportunity to mobilize a public already unhappy about rising inequality and declining economic mobility. But now an opportunity has presented itself: a major grassroots campaign could be launched against President Obama’s increasingly likely selection of Lawrence Summers to head the Federal Reserve.

Supporters of Obama’s 2008 campaign were furious when the President selected Summers for a key economic post in 2009. Now a President who supports a higher minimum wage, raising taxes on corporations and the wealthy and extending unemployment benefits is potentially going to turn the keys to the country’s economy over to someone who opposes all these positions.

Even its critics thought the Occupy movement raised important questions about dramatically rising income inequality in the United States. And that’s why I doubt Obama would be considering Summers if the Occupy movement were still dominating the public debate.

Randy Shaw is Editor of BeyondChron. He analyzes the Occupy movement’s strategic successes and failures in his new book, The Activist’s Handbook, Second Edition: Winning Social Change in the 21st Century.