Did San Francisco Look Better Then, Or Now? 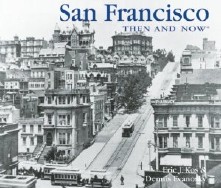 San Franciscans have never easily embraced architectural change. And many would argue with good reason, in light of such ill-conceived actions as allowing the demolition of the FOX Theater on Market Street, or the replacement of the fabled City of Paris by the boring Nieman Marcus building on Union Square. San Francisco Then & Now is one of a series of similar books on major cities that could have combined its beautiful photos with a provocative discussion of architectural change. But it misses this opportunity. Instead, it describes contemporary scenes with an enthusiasm bordering on boosterism. But even its contrasting vibrant color photos of the present with dull black and white depictions of past scenes cannot obscure how much more architecturally interesting much of San Francisco once looked.

The concept of contrasting two photos of the same city scene over a fifty or even one hundred year period has enormous potential. And it must be popular, as there are “Then & Now” books for six major cities other than San Francisco. But authors Dennis Evanofsky and Eric Kos do not give the San Francisco of the past a fair shake. The authors clearly have an extremely uncritical and favorable view toward contemporary San Francisco architecture; or else felt that the book would not sell if scene after scene showed San Francisco less architecturally interesting today than in the past.

Consider its contrasting photos of Fillmore Street. The Redevelopment Agency’s demolition of the grand historic buildings on Fillmore, and their replacement with few structures of architectural interest or merit, perfectly fits the book’s theme. But their choice of a dreary pre-1940’s Fillmore Street scene, in which the block is almost entirely deserted and few of the great buildings shown, is bizarre.

Equally odd is their single sentence to describe the massive demolition of the neighborhood, “During the 1960’s, redevelopment of the district effectively muted the music for a few decades.” Muted the music? If that were all Redevelopment did, Fillmore Street would still be one of the nation’s great thoroughfares. Unfortunately, the Fillmore contrast is all too typical of the book, which goes out of its way to downgrade the past and inflate the present.

A surprising number of the “then” photos are either immediately post 1906 earthquake or show undeveloped land. This does not allow readers to make any real architectural comparisons. The book’s front and back covers that show contrasting images of a developed Powell Street coming down from Nob Hill is what many might expect from the rest of the text, but this is not the case.

The author’s give a glimmer of the type of debate and discussion their book could have provoked in “then and now” photos of the “Montgomery Block” where the Transamerica Pyramid was built in 1971. What could today be a beautifully restored historic four story office building that contributed to active pedestrian life was replaced by a structure that, while iconic and quite interesting from a distance, is a street-level disaster. Was this a positive step for the city? Should the Montgomery Block have been demolished in 1959? This debate will not be found in this book.

The book’s best contrasts include its photos of Lotta’s Fountain and the intersection of Market, Kearny and Geary, and its photos of the once wild Barbary Coast being transformed into “a sedate place of valuable property converted to modern uses.” But it missed a great opportunity to contrast the past and present Mission Bay, and excludes most of the city’s neighborhoods (heavily relying, as do most books and films involving San Francisco, on the neighborhoods north of Nob Hill and connected to the waterfront).

I was bothered by the book’s use of often-hazy black and white photos for the past and almost always-sharp color photos for the present because it seems to distort the contrast in favor of today. It could be that, since colored photos often were not available for their chosen “then” examples, the authors sought to avoid a book of entirely black and white representations. But they should have had some for their “now” section at a minimum if they were truly trying to lay the groundwork for discussing past and present architectural achievements/failures.

San Francisco Then and Now has some outstanding photos, but it is a missed opportunity for generating interest in the wisdom of the decisions that led to today’s San Francisco.