School Choice and the New Segregation 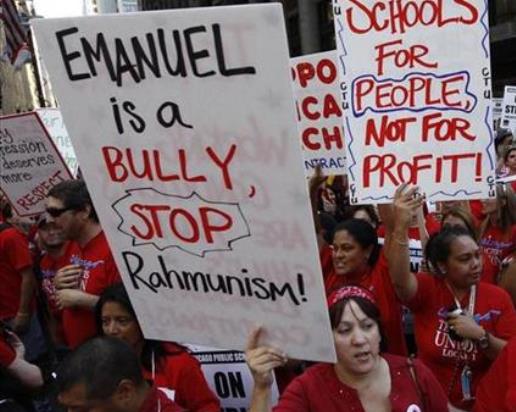 “But a new WBEZ analysis shows an unintended consequence of the choice system: students of different achievement levels are being sorted into separate high schools.

“WBEZ analyzed incoming test scores for freshmen from the fall of 2012, the most recent year data is available. That year, the district mandated that every high school give students an “EXPLORE” exam about a month into the school year.

“The 26,340 scores range from painfully low to perfect.

“WBEZ found few schools in the city enroll the full span of students. Instead, low-scoring students and high-scoring students in particular are attending completely different high schools. Other schools enroll a glut of average kids.”

“The findings raise some of the same long-running questions educators have debated about the academic and social implications of in-school tracking. But they also raise questions about whether the city’s school choice system is actually creating better schools, or whether it’s simply sorting certain students out and leaving the weakest learners in separate, struggling schools.

Serious brain drain. The city’s selective “test-in” high schools — among the best in the state — capture nearly all the top students in the school system. There were 104 kids who scored a perfect 25 on the EXPLORE exam. One hundred of them — 96 percent — enrolled in just six of the city’s 130 high schools (Northside, Whitney Young, Payton, Lane, Lincoln Park, and Jones). In fact, 80 percent of perfect scorers went to just three schools. Among the city’s top 2 percent of test takers (those scoring a 23, 24, or 25 on their exam), 87 percent are at those same six schools. Chicago has proposed creating an 11th selective enrollment high school, Barack Obama College Prep, to be located in the same area as the schools already attracting the city’s top performers.

Within neighborhoods, more sorting. Schools within a particular community may appear to be attracting the same students demographically, but WBEZ finds significant sorting by achievement. Especially in neighborhoods on the South and West sides, the comprehensive neighborhood high school has become a repository for low performers; nearby charters or other new schools are attracting far greater percentages of above-average kids.”

This article first appeared in DianeRavitch.net