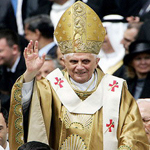 Believe it or not: The Catholic Church in America hasn’t lost any popularity among the faithful since major priest sex scandals first hit the headlines five years ago.

According to a study by the Center for Applied Research in the Apostolate at Georgetown University, Catholics haven’t left the church in droves nor have they stopped contributing their hard-earned dollars to Sunday collection plates across the country. Even Catholic Charities hasn’t suffered any loss of revenue.

In fact, surveys show that 74% of Catholics still think their bishops are doing a bang-up job, despite the fact that many in the hierarchy have been forced to apologize for covering up for priests they knew were having sex with young people.

Of course there’s been financial damage: Since 2002, Holy Mother Church has had to shell out over $2 billion to settle sex abuse cases. The latest settlement in the Los Angeles Archdiocese has a price tag of $660 million with a large portion of it ($250 million) coming out of church coffers and the rest from insurance.

Another big settlement is looming in San Diego where some 150 litigants are looking to get their chunk of change. The floodgates have indeed opened. In the past few years, some 2,000 individuals have come forward to charge priests with sex abuse, nearly 1,000 of them in California alone.

Some dioceses hit with lawsuits have been forced to sell off property from their vast holdings, while other have initiated bankruptcy protections. It doesn’t seem to have put a dent in the church’s wealth. No one seems to know just how deep the religious institution’s pockets are. Suffice it to say, the church can probably afford to pay off a lot more cases. Especially if donations from the flock keep coming in.

That large numbers haven’t abandoned the church shows the stranglehold religion has on people. When I was a kid in Catholic school, the priests had a popular saying: “Give us a child and by the time he’s five, we’ll have him for life.”

The sex scandals prove it.

For many people, the church can do no wrong. They don’t approve of what the priests did, but they’re not going to stop supporting the religion they grew up with. Sure, they’re angry, they may even be a bit disillusioned, but they’re not switching brands of Christianity nor swearing off the old “opiate of the masses.” One typical Catholic in Cincinnati told Reuters that she continues to attend Mass because “I was just raised that way, and I like to go.”

With faithful like that, who needs to worry about priest sex scandals?