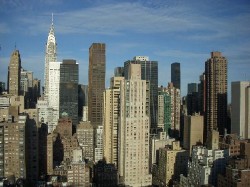 What do Governor Schwarzenegger, the Chief Justice of the California Supreme Court, labor activists, land use reformers, and many progressives have in common? All blame ballot initiatives for California’s current problems. California’s budget crisis has spawned such outrage over the initiative process that there is talk about new restrictions, with many progressives concluding that a onetime populist process has become a tool for the powerful to control policy. Fortunately, New York City provides a case study of a large, ethnically diverse, California-like entity where citizen ballot measures are not an option. The result? A profoundly undemocratic city where large real estate developers call the shots. Progressives who attack “ballot box planning” and other uses of the initiative process should look at what happens to NYC neighborhoods that have no ability to stop or even influence the most destructive of development schemes. Most of these projects could never happen in San Francisco or other California localities – because the public’s access to ballot initiatives prevents them.

Since tenants across California have achieved virtually every meaningful rent control or eviction protection through ballot measures rather than the legislative process, I’ve always been a big supporter of the initiative process. But many progressives point to Prop 13 and its progeny and conclude that the ability of wealthy interests to win sweeping changes in a single measure is so destructive that the initiative process must be reined in, if not sharply curtailed.

California’s initiative process was intended to be limited by what was known as the “single subject” rule. This rule prevented multi-subject measures like Prop 13. But Republican California Supreme Court Judges, seeking to validate anti-tax, anti-government measures, voided it.

New York City, heavily Democratic and generally considered a progressive stronghold, is involved in three giant development fiascos. None could have occurred in San Francisco due to the initiative process.

The first, the billion-dollar giveaway of public funds for a new Yankee Stadium, is precisely the type of proposal San Francisco voters would have rejected. We know this because the 1989 stadium initiative for the San Francisco Giants involved barely any public funds, and was still defeated by voters opposed to any public subsidies for wealthy sports team owners.

The Yankees deal, which also destroyed Bronx parkland used by overwhelmingly low-income people, would never have gotten beyond the talking stage in San Francisco because the politicians would have told the team that the voters would never go for it. But absent the threat of an initiative, the Mayor and Yankees redirected desperately needed public funds to subsidize Major League Baseball’s richest team.

And while the Yankees will soon be hosting the World Series in their new home, the promised replacement parks still do not exist.

When I worked with staff of the Northwest Bronx Community and Clergy Coalition (NWBCC) from 1999-2003, I learned about its creative strategies to transform the block-long, vacant Kingsbridge Armory into a great community space. Working with the community, the NWBCC ultimately produced a visionary plan for schools, living wage jobs, youth programs and other community services.

NWBCC ultimately created a planned Community Benefits Agreement for the site. Its “Blueprint for the Bronx” had the backing of all of the city’s major labor unions, the Bronx community and religious and community groups.

But NYC Mayor Michael Bloomberg has publicly attacked Community Benefit Agreements, and his Planning Commission rejected the NWBCC plan in exchange for a developer’s proposal to turn the Armory into a hub of low-wage fast food and chain store jobs.

And a proposal for poverty wage jobs would not win a New York City election.

This Brooklyn-based project is in a class by itself for circumventing the popular will.

It’s no so much that New Yorkers would automatically reject this proposal for a basketball arena and sixteen high-rise buildings adjacent to residential neighborhoods; as bad as this idea is, what is worse is the massive level of public subsidies to enrich the private developer, along with the use of the type of eminent domain – for private profit rather than public benefit – that even pro-development conservatives oppose.

The latest details on the ongoing Atlantic Yards saga can be found here. But two aspects of this plan – not subject to a ballot initiative – deserve special attention.

First, the project today is nearly completely different than what was initially approved – and yet the city moves forward without any new public review by a body empowered to kill the completely different project (for example, architect Frank Gehry, whose innovative arena design was a huge selling point, is long gone, along with his design.)

Second, it was revealed last week that the big prize the project was supposed to bring – 2250 below-market rent units in a deal brokered by ACORN – is completely illusory. If the government does not make subsidies available, than developer Bruce Ratner/Forest Cities is off the hook.

We know how scarce housing subsidies are these days. And now that Ratner is simply accessing subsidies that would have gone elsewhere, Atlantic Yards will actually produce no net increase in affordable housing units in New York City.

Remember Mayor Newsom’s “Workforce Housing Plan,” Prop J on the March 2004 ballot? That attempt to rezone neighborhoods for high-rise development was defeated by voters in a landslide, and not revived.

When developers promote massive up-zoning in San Francisco, politicians explain to them that unless they work out a deal with neighborhood groups, no re-zoning will occur. Yet in initiative-free New York City, Mayor Bloomberg has already made over 100 major zoning changes, the vast majority to foster increased development.

Former San Francisco Mayor Willie Brown must be marveling at what he could have done had he operated, like Bloomberg, in a city that prevented residents from going to the ballot to challenge new developments and zoning.

Progressives Should Get to Work

Someone needs to explain to me how the UFW secured 720,000 unpaid signatures in 29 days in 1976 for a California ballot measure (Prop 14, a campaign I discuss in Beyond the Fields) and yet now we are told that it takes millions and millions of dollars to even qualify a progressive measure for the state ballot.

The UFW had no cell phones, no Internet, no Twitter – and they did something over thirty years ago that today’s progressives contend cannot come close to being replicated?

This makes no sense. It says to me that progressives have not been serious enough about qualifying progressive measures for the state ballot, and then mounting strong grassroots campaigns.

That, rather than the initiative process itself, is the problem.

Randy Shaw is also the author of The Activist’s Handbook