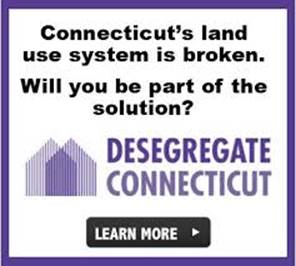 In the latest of his attempts to divide the country, President Trump turned his focus to a new wedge issue: zoning. In a press conference last Thursday, Trump decried efforts to make land use laws more equitable, claiming that such changes would “destroy the value of houses” and “destroy the beautiful suburbs.” Over the weekend, he added, “They want to eliminate single family zoning, bringing who knows into your suburbs, so your communities will be unsafe and your housing values will go down.” Such misleading, inflammatory rhetoric is hardly surprising coming from this president. But as readers of BeyondChron know well, these arguments—and the policies they support—are also dominant in supposedly progressively states and cities.

This is particularly the case in my home state of Connecticut. Connecticut is among the most racially segregated states in the country, and is home to the nation’s most segregated metropolitan area. This state of affairs is no accident – it is the result of the state’s hyper-localized land use regime.  Of Connecticut’s 169 municipalities, only 19 allow housing with three or more units without requiring special permits. Restrictive zoning, costly review processes, and arbitrary impediments thwart affordable and multifamily housing development. As a result, Connecticut’s high-opportunity neighborhoods remain inaccessible to those who can’t afford high-priced single-family homes, creating segregation along economic and racial lines.

This reality has severe consequences. Children who grow up in low-income, segregated neighborhoods make less money, go to college at lower rates, and have other measurably worse life outcomes than those who grew up in integrated neighborhoods. In a state where it is 3.5 times more expensive to live near a high-achieving school than a low-achieving one, these outcomes are all but ordained by the state’s land use laws. Moreover, economic opportunity is concentrated in Connecticut’s mostly white suburbs, beyond the reach of non-white residents priced out of these exclusionary areas.

Against this backdrop—and motivated by nationwide protests against systemic racism—a coalition of planners, activists, and others formed Desegregate Connecticut, a group committed to reforming the state’s land use laws. Last week, the group unveiled a list of legislative proposals with the aim of increasing housing supply, generating diversity in housing types, and improving the process for approving new residential development.  “If you’re serious about income inequality, social inequality & racial inequality, join us in helping tear down the legal barriers that make CT one of the most segregated states in the country,” said lead organizer Sara Bronin a land use law professor and architect.

The ambitious demands, including accessory dwelling units statewide, “middle housing” (2-4 units) near transit and commercial corridors, caps on fees and parking requirements, and more, would significantly increase the availability housing options throughout the state, knocking down walls of exclusion and expanding access to opportunity. The American Planning Association chapter has endorsed these proposals, saying that “now is the time to significantly reform zoning to address institutional, structural and procedural practices that have stymied socio-economic integration across our communities.”

These proposals face an uphill climb in a state where “local control” is a shibboleth. But there is reason for optimism. Several legislators, including the State House Majority Leader, participated in the Desegregate Connecticut press conference last week.  Over thirty organizations—ranging from the Regional Plan Association to the Hartford Foundation for Public Giving to the Urban Hope Refuge Church—have also announced their support. Perhaps most significantly, the Connecticut Conference of Municipalities (CCM), a statewide association representing over 90% of Connecticut cities and towns, indicated its willingness to tackle zoning reform.

“CCM recognizes that local land use laws can contribute to the racial and socioeconomic segregation we see in Connecticut, and if we are serious about combatting systemic racism and promoting greater diversity throughout our communities, we should include land use laws in that conversation,” said Joseph DeLong, the CEO of the group.  “While our members do not all agree on every proposal that’s been put forward, we support the legislature in considering a serious reform agenda aimed at creating more diverse housing opportunities and more diverse communities.”

To the disappointment of advocates, Governor Ned Lamont has announced that housing would not be on the agenda for the state legislature’s special session starting this month. However, the Governor expressed openness to addressing the issue in a second special session this September, affirming the political efficacy of the group’s efforts thus far.

The late John Lewis said, “We are one people with one family. We all live in the same house.” Through its regime of sanctioned segregated, Connecticut is failing to live up to Lewis’ vision of an integrated, interconnected union. Given the urgency of the present crisis—in which disparities in health outcomes and access to services have laid bare the inequities between differently situated communities—it is imperative that Connecticut doesn’t delay any further. It is high time for the state to take bold action to desegregate Connecticut.

Nick Abbott is a student at Harvard Law School, originally from Greenwich, CT, and is on the legislative team for Desegregate CT.