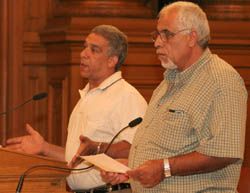 The Board of Supervisors dealt hundreds of building code violators a blow yesterday, approving liens on their properties that must be paid off before their units can be sold or refinanced. The liens, imposed by the Department of Building Inspection (DBI), prevent landlords from escaping paying fines for ignoring violations ranging from broken faucets and pest infestations to building without a permit. Despite appeals from several landowners to eliminate their liens, the Board approved every lien forwarded by DBI, netting them $78,000 for 88 cases of wrongdoing.

The process of assigning liens to negligent property owners began in 1995, when voters approved the creation of DBI. Before its existence, landowners received no penalties for not responding to notices of building code violations in a timely manner – in fact, a financial incentive to ignore violations existed, because money could be saved by waiting as long as possible to make requested repairs or obtain proper permits.

The liens eliminated this incentive, forcing property owners to pay DBI for the cost of building inspectors visiting properties to issue repeat violations. Should landowners refuse to pay, the liens prevent them from selling or refinancing their property without first paying off the debt.

This penalty represents and important aspect of the code enforcement and building inspection programs at DBI, which are devoted to ensuring landlords remain proper habitability conditions for their tenants and that builders do not do any construction without the proper permits.

Bob Noelke, a senior inspector for DBI, called the liens an “important factor in our code enforcement efforts.”

Yesterday’s hearing served as both a city-mandated opportunity for the Board to approve the liens, as well as a public hearing for property owners who felt their liens had been assigned unfairly. These hearings occur once a year, and have been occurring since the liens’ creation in ’95.

Three different property owners testified at the hearing, all claiming the liens had been improperly assigned. DBI officials responded to each of them, detailing the case and the reasons for the liens. The Board denied all of their protests, finding DBI’s arguments satisfactory.