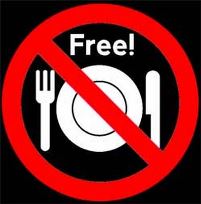 Willingboro, NJ, now has a new reason to be embarrassed. The residential community outside Philadelphia, whose major source of shame used to be that it was briefly called “Levittown” (after the tract housing builder), has become the poster child for how not to treat schoolchildren.

Willingboro Township Public Schools recently sent a letter home to all families informing them that children whose lunch accounts are empty will no longer be provided a free lunch on credit; instead, students without lunch money will have to surrender their lunch tray and see their meal dumped into the trash.

The school district promised to make a better effort to communicate with parents and let them know when their child’s account has just $5 remaining, to allow time to add money. But, unlike many other school districts which offer a substitute meal of a cheese sandwich, or allow students to charge a couple of meals before being cut off, the Willingboro policy is among the strictest in the nation – no money, no lunch, not even for 5 year olds. Period.

Reaction to the draconian policy was swift and sharp. New York University professor Marion Nestle, one of the country’s leading authorities on nutrition and food politics, was “appalled” by the letter, and wrote on her Food Politics blog, “Hungry kids need to be fed. They can’t learn if they are hungry.”

Philadelphia-area columnist Phil Gianficaro called the policy “financial bullying” and wrote that it “makes me wonder if it’s the school board members, not the students, who are most in need of an education. Or a compassionate heart.”

NJ State Assembly member Joseph Cryan called the policy “outrageous” and “incomprehensible”, saying, “This sounds like something from the Dark Ages.”

The Willingboro school district has already posted a clarifying statement on their website, claiming that the “no humanitarian meals” policy is necessary to address the growing total of unpaid meal charges amassed by district students, which for the fiscal year 2013 was about $46,000.

According to NJ Department of Education figures, the district enrolled about 3,700 K-12 students in 2012-13; about 68% were eligible for government-paid meals (2,088 for free meals and another 449 for reduced price.) Those qualifying for free meals will not be affected by the new policy, but it is unclear whether the 449 students eligible for reduced price meals, who are supposed to pay 40 cents for lunch, will be left to go hungry if they are unable to make that small payment.

Willingboro is far from the only school district stuck with a tab for unpaid student meals. Diane Pratt-Heavner, spokeswoman for the School Nutrition Association, says the association is calling on Congress to instruct the USDA to establish uniform national guidelines for schools to follow to help them address the growing problem of unpaid meal charges.

However, most school districts give students with no lunch money something to eat, even if not the full meal. In January 2009, Albuquerque Public Schools adopted a policy of giving children with no lunch money a cheese sandwich in lieu of a hot lunch. Just a few weeks after the policy was implemented, an article indicated that the cheese sandwich gambit “has brought in $42,000 of the $140,000 in lunch debts, and qualified another 1,300 students for free or reduced-prices lunches since early January.”

Giving students with no lunch money a “meal of shame” of a cheese sandwich may sound heartless, but less so than forcing children to go hungry all day.

There are other steps a school district can take to help minimize the loss from unpaid charged meals. A better effort can be made to collect meal applications from 100% of students. When San Francisco Unified School District began insisting that every family needed to return a form, even if they were not interested in applying for free meals, the number of students who did qualify increased from 48% to about 60%.

Schools with low income students whose families have not applied for free meals can take matters into their own hands. As the USDA regulations explain, “Local school officials may complete an application for a child known to be eligible if the household fails to apply…This option is intended for limited use in individual situations and must not be used to make eligibility determinations for categories or groups of children.”

Some school districts allow K-8 students to charge occasional meals but have the stricter “no money, no meal” policy in place for high schools, in the belief that teenagers are old enough to pack lunch from home or remind their parents to provide lunch money. Some withhold students’ grades until cafeteria debts are settled.

The Meridien (CT) school district outlines four steps to be taken to address student debt before considering withholding a meal. They include referring the delinquent account to small claims court or to a collection agency, but all involve taking action against the adults in the family, not the children.

There are always going to be families who barely miss the cutoff for eligibility for free or reduced meals, but who still don’t earn enough to have sufficient food in the house every day, or to pay for school lunches. This is especially true in high cost of living areas like San Francisco.

Eligibility for government-paid meals is based on a sliding scale depending on family size. A family of four with two adults each working 40 hours per week at SF’s minimum wage of $10.55 per hour earns $43,888 annually, putting them just over the $43,568 cutoff for free or reduced lunch.

Yet it is almost impossible to imagine how four people can subsist on less than $44,000 in a city that the Wall Street Journal called “arguably one of the worst cities in America to be a renter”, with average rent on a one bedroom apartment well above $2000 per month. In 2011 it was estimated that, in San Francisco, a family of two adults and two elementary school aged children would need income of almost $62,000 annually to live without government assistance. No doubt that figure would be even higher today.

What are schools to do when children from families who are only just barely getting by, turn up in the cafeteria line with no money in their account? Unpaid meal charges result in a 6 figure expense for the SFUSD school meal program each year, but the school district views it as a cost of doing business. Children who have been humiliated in front of their peers in the lunch line by having their tray of food snatched away and thrown in the trash are in no condition to pay attention and learn when they return to the classroom 30 minutes later.

As Marion Nestle pointed out, hungry kids can’t learn either. The annual cost of remediation to try to bring kids who fall behind at school back up to grade level is enormous, far exceeding the cost of just making sure every youngster has a decent lunch. Schools that try to balance their food services budget on the backs of hungry children are being penny wise but pound foolish.

To the adults in Willingboro who implemented a policy that punishes children for the actions of their parents – You should be ashamed of yourselves! But it’s not too late to try to save face. Repeal the policy, apologize to the community, and rethink how to hold parents accountable without traumatizing their children. The students of your community deserve nothing less.