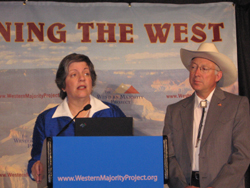 DENVER 3:33 PM: When Barack Obama beats John McCain in November, it will be because the Mountain West region profoundly changed. “Despite Arizona’s reputation as a state of retirees,” said Governor Janet Napolitano, “it’s one of the five youngest states.” The three fastest growing states in the country are all in this region, and new voters are either college-educated professionals who are turned off by the Republican Party’s moralizing – or Latino immigrants who fear the right-wing backlash. “Arizonans understand building a wall is not an immigration policy,” said Napolitano. While McCain is still favored to win his home state, he’s only ahead by 10 points – whereas Obama has a solid chance of winning New Mexico, Nevada, Colorado and possibly Montana. Pollster Andrew Meyer concluded the press conference with a slide presentation of the region’s demographic trends – much of which is available here. “As Republicans pander to their Southern coalition more and more,” said Meyer, “they are causing more problems in the West.”