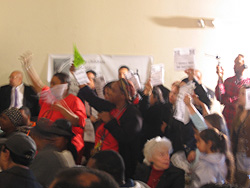 As he continues to defy the voter-approved “Question Time” at the Board of Supervisors, Mayor Gavin Newsom held a second Town Hall on February 10th at the Whitney Young Child Development Center in Bayview. In stark contrast to his first meeting in the Richmond, the audience did not let the Mayor run a scripted, staged event where he is in complete control. The largely low-income African-American residents of Bayview were upset about the past, frustrated about the present, and anxious about the future – including the City’s plan to demolish the Alice Griffith Housing Project. While the Forum did not stick with Newsom’s program to keep it scripted and focused, it was far more entertaining and insightful than his last Town Hall – as residents effectively pushed to hold the Mayor’s feet to the fire.

Before the event, housing activists held a press conference to protest the insincerity of the Mayor’s Town Hall forum, as well as the City’s plans to demolish the Alice Griffith Homes. Under this proposal, the City would give the land to the Florida-based Lennar Corporation and build a new parking lot for the 49ers (who have threatened to leave San Francisco.) “This meeting does not represent the neighborhood,” protested Lisa Gray-Garcia of POOR Magazine. “Community voices in the Bayview are being systematically displaced. Low-income people and communities of color are being kicked out.”

“Lennar,” said activist Willie Ratcliff, “does nothing but move around the country and lie, and give money to politicians. If you want to keep living in this City, you gotta stand up and fight.” While the City claims that there will be one-for-one replacement for all units demolished, public housing residents have heard such claims before – such as Valencia Gardens in the Mission District. With Lennar having reneged on plans to build 400 rental units in Hunters Point, it was not surprising that the neighborhood would once again question the company – and the City’s — sincerity.

The activists then marched into the Whitney Young Center – but police officers would not let them bring their signs inside. At the beginning of the Forum, four of them stood up and interrupted Mayor Newsom, chanting “we shall not be moved.” They were quickly whisked away, as the Reverend Amos Brown yelled at them for being disrespectful. But while the protesters did not stay for the rest of the two-hour forum, the issues that they had raised went on to dominate the rest of the meeting.

Like Newsom’s other Town Hall forums, the Mayor explained that they would only limit discussion to one issue – economic development in Bayview-Hunters Point. In his opening remarks, he bemoaned the fact that San Francisco has not solved the issue of poverty – and why we have not addressed “the health divide, the wealth divide, the economic divide and income inequality.” He added that in his lifetime the City’s black population has plummeted from twenty percent to eight percent, and then had Dwayne Jones (who runs the City’s “Communities of Opportunity”) give a detailed presentation on what they were going to do about it.

Attendees were urged to write their questions on index cards. Rather than have a neutral moderator sift through the cards, Mayor Newsom got to decide which of the questions got asked. Rather than answering the questions himself, Newsom had over a dozen department heads available to respond. It was the same format they had used to control the Richmond town meeting, but the results were not the same.

With a room full of low-income people demanding answers to a pressing problem, scripted formalities were just not going to cut it. Newsom repeatedly tried to bring the audience back to questions on the index cards (“we have 75 questions on these cards,” he complained at one point) — but residents preferred to stand up, raise their hands, and ask the questions themselves. One after another, residents got up to complain about the Housing Authority’s neglect in maintenance requests, and the lack of community input in community-based programs.

And a large contingent from ACORN was on hand to demand answers about Alice Griffith – what’s really going to happen and where will the poor go. “Residents have been very diligent,” replied Dwayne Jones, “and we will guarantee one-for-one replacement at low-income rates.” Newsom chimed in and said “we’ve learned from our past mistakes,” and that they were not going to do it again. Supervisor Sophie Maxwell pledged that “nobody will be moved until the replacement units are built.”

But the crowd was skeptical about such promises – as they wondered why the land should be taken by a Florida-based company, when local developers have a better track record at building affordable housing. Beyond simple promises that there would be no displacement, the City implied that public housing residents should become homeowners. Regina Davis, of the San Francisco Housing Development Corporation, urged the residents to think about homeownership, and added that her agency offers private counseling services for residents to discuss credit issues.

But the “affordable” units touted to create homeownership opportunities for Bayview residents are not affordable for this population – a fact that no amount of credit counseling could truly rectify. “If you only make $18,000 a year,” said Bayview activist Marie Harrison, “there is no way you are going to be a homeowner in this City.”

Needless to say, a lot has happened to the Mayor’s public image in the past month since his last Town Hall forum. While nobody raised Newsom’s personal problems on Saturday, the recent headlines have underscored his disengagement from his job as Mayor. “The Mayor’s Office is adrift and unprepared to engage the public in a meaningful and productive way,” said Julian Davis of the San Francisco People’s Organization. “San Francisco deserves a hands-on Mayor who is focused on solutions, has the wherewithal to engage in effective dialogue, and has the ability to deliver meaningful results.”

Holding a scripted and staged public event may have appeased a group of white, upper-middle class residents in the Richmond District. But it clearly wasn’t sufficient for public housing residents in the Bayview – angry at the proposed gentrification of their neighborhood, and distrustful of the City’s proposed economic development solutions. Newsom’s latest Town Hall forum further underscored the need for him to become more focused on the City’s pressing problems – and the need to stop governing by press release.