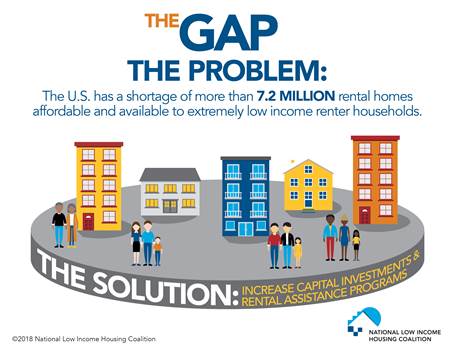 What does it mean for Democratic presidential candidates to strongly back housing? Health care advocates push “Medicare for All,”  enviros a “Green New Deal,” but housing lacks a consensus action plan.

Here’s a suggestion: Democratic candidates should commit to building and/or subsidizing 5 million affordable homes by the end of their first term. Why 5 million?

As the above photo from the National Low Income Housing Coalition shows, the nation has a gap of 7.2 million homes for extremely low-renters. So 5 million new homes are certainly needed. Further, California Governor Gavin Newsom campaigned on building 3,500,000 new homes in California alone (market rate and affordable); that also makes 5 million affordable nationally quite reasonable. 5 million homes also covers the rough percentage of households paying over 50% of their income for rent, which defines them as “severely rent burdened” (17% of 43 million renters fit this category)

The next president’s implementation of a pledge to build or subsidize 5 million affordable homes would bring a long overdue transformation of how people in the United States are housed. Activists should settle for no less. The past two Democratic Presidents made little dent in the nation’s longstanding housing and homelessness crises; in fact, in many respects both worsened under presidents Clinton and Obama.

I learned the benefits of having a numerical target for building or subsidizing new homes from former San Francisco Mayor Ed Lee.

I thought the mayor made a huge mistake. He had set himself up for failure. But Lee understood the psychology of his announcement better than I did; setting the 5000 goal became a strategy compelling city agencies to act with urgency to get it done.

A sense of urgency is even more vital to getting housing spending moving in Washington DC.  By requiring presidential candidates to commit to building or subsidizing a specific number of  units,  activists can measure progress  based on demonstrable outcomes. Basing performance on units created rather than dollars spent facilitates accountability, and makes it easy for the public to track.

Focusing on unit counts also gets presidents connected to solving the local barriers to expanding housing supply. Bernie Sanders announced during his campaign opener last Saturday that if elected “we will attack the problem of urban gentrification and build the affordable housing our nation desperately needs.” Sanders supporters in Cambridge and other cities have supported  exclusionary zoning laws that promote gentrification,  so getting a president engaged in breaking down such barriers will help.

By urging 5 million units rather than a specific dollar amount I am not questioning Elizabeth Warren’s ambitious proposal to add $45 billion a year to the National Housing Trust Fund. We need these funds. Warren is the first major presidential candidate in years to highlight housing and boosting the National Housing Trust Fund is essential for meeting the 5 million unit goal.

But I do not hear non-housing activists talking about Warren’s plan. A proposal connected to the little known (though essential) National Housing Trust Fund is insider baseball that will not catalyze a movement.

Selling policies involves marketing. It’s why “single-payer health care” is now “Medicare for All.” And why Obama’s “Green Jobs” agenda has been replaced by the popular “Green New Deal.”

Housing suffers from wonkishness. Get affordable housing folks in a room and you’ll hear about ami’s, the LIHTC, Section 8, the MOI, BMR’s and the like. It’s a foreign language to average voters.

National housing goals need to be discussed in a way everyone can understand: as affordable units built or subsidized.

Candidates unwilling to commit to creating a specific number of units are sending a message. Either they have not thought deeply enough about the nation’s affordability crisis and/or they cannot be trusted to meaningfully tackle the housing crisis if elected.

That may sound harsh, but it is true. A candidate would be disqualified from the Democratic race if they said they had no ideas for solving the health care crisis; housing should be no different.

California’s March 2020 primary means that the state with the worst affordability crisis has a key role in the nomination contest. Housing activists must get candidates to adopt a transformative vision that reframes the national  agenda around  a drive for 5 million homes (or an alternative number). And then activists must demonstrate the importance of the issue by turning out voters to support the most pro-housing candidate.

We cannot accept another four years of the federal government abandoning its housing responsibilities. Nor can we accept a new Democratic Administration putting the national housing and homelessness crisis on the back burner while it focuses on other priorities.

Housing creates as many blue-collar jobs as any federal investment. Creating 5 million affordable homes is the best social and economic policy.

Randy Shaw is Editor of Beyond Chron. He offers solutions to the affordability crisis in Generation Priced Out: Who Will Live in the New Urban America.