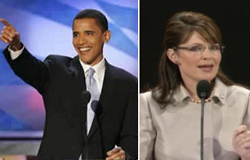 As the presidential race continues to show Democratic gains due to the economic crisis, a poll released yesterday found Barack Obama leading John McCain by a couple points in—of all places—North Dakota. What’s remarkable here isn’t that North Dakota hasn’t voted Democratic since 1964 (a lot of red states like Indiana and Virginia that last voted Democratic for LBJ are in serious contention.) It’s that the Obama campaign officially pulled out of the state several weeks ago—after Sarah Palin consolidated the right-wing Republican base. But now Palin continues to be the gift that keeps giving—as a much-hyped West Virginia campaign swing to bolster the McCain ticket got cut short after she brought out more protesters than supporters. If 2008 will be another “blue wave” year that rivals 2006, observers should take a closer look now at other pick-up opportunities off the radar. One of them is the Texas State House—where Democrats are only five seats short of winning back control.

I concluded on September 19th that despite an impending Obama victory, McCain’s selection of Sarah Palin would do damage to the Democratic “Fifty State Strategy”—because it re-ignited America’s culture wars. Even if Obama could win enough “swing states” to generate a sizable victory, a re-invigorated right-wing base in the Republican Party had effectively turned states that Obama hoped to at least make competitive into a waste of resources.

But developments in the past week may indicate I was wrong, and that Democrats can still be competitive in the reddest states. First, a mass turnout of early voting among African-Americans in Georgia suggest the state will be closer than we think (although likely still Republican)—and Democrats have a chance of defeating G.O.P. Senator Saxby Chambliss. And a North Dakota poll yesterday showed Obama ahead by a two-point margin.

To be fair, observers like FiveThirtyEight aren’t yet ready to take the North Dakota poll seriously—as it wildly contradicts earlier polling from just a few weeks ago. But what’s interesting here is that Georgia and North Dakota are both states that the Obama campaign left for dead a few weeks ago—diverting resources to more “winnable” prospects. Without the guidance of a professional field campaign, Obama volunteers in North Dakota continue to hold a grass-roots presence—and it’s obvious their activity (plus the economic crisis) is producing a perfect storm.

How much is Sarah Palin a liability—rather than an asset—for the McCain campaign in even the reddest states? Consider West Virginia, where Obama got slaughtered in the primaries after voters candidly told the press they wouldn’t support a black candidate. Late last week, Republicans announced that Palin would kick off a bus tour of the state—a move widely perceived as a sign of weakness for the Republican ticket. I had expected more of the rallies we’ve seen in the last few days (where Palin whips up her party base into a racist frenzy) to be all over West Virginia.

But I was wrong. Palin’s West Virginia tour lasted exactly 25 minutes, as she literally did a pit stop before going to Ohio. No speeches or press availability—just a “wink” to her supporters. The campaign had planned a rally to greet her, but only twelve people showed up. But she did inspire a few Obama rallies in the state. Over 100 people gathered at the United Mine Workers headquarters to express support.

With increased progressive prospects across the country, one of the most overlooked opportunities is in Texas—where Democrats are only five seats short of winning back the State House. The Texas state legislature, of course, is where indicted House Majority Leader Tom DeLay engineered a mid-decade redistricting effort—designed to keep the Republicans in power forever. While the State Senate is still safely in G.O.P. hands, a few more resources and media attention can now flip control of the State House.

While Texas blogs like Burnt Orange Report have done a good job covering these races, even progressive media outlets at the national level have yet to tune in on this story. With only five seats to a Democratic majority, the Austin Chronicle has profiled seven races that the Republicans are in danger of losing control of the State House.

One example is House District 102, which covers suburban areas of North Dallas and Garland, Texas. It’s a very diverse district, including one of Texas’ largest Jewish
communities and working-class Garland—the model for Mike Judge’s cartoon “King of the Hill.” The district is 20% African American, and like the rest of Democratic-leaning Dallas County, has seen a surge in voter registration. It’s the kind of district that was drawn to be 55-60% Republican, but with demographic shifts over the past 8 years and more independents trending Democrat, it hasn’t worked out the way DeLay had hoped.

The twenty-year GOP incumbent is Tony Goolsby, a Karl Rove protégé and (like John McCain) the husband of a wealthy heiress. His pro-deregulation stances have led to dramatically increased utility rates and tuition hikes at public colleges and universities, well outside the national average. The Democrat is School Board member Carol Kent, a down-home North Dallas who some observers have pegged as the next Ann Richards. The Dallas Morning News, which leans conservative, recently endorsed Kent.

In this “year of change,” where voters are getting tired of long-time incumbents who are insensitive to the economic effects of de-regulation, Kent could easily pull off the kind of upset that will put Tom DeLay’s legislature into blue hands.