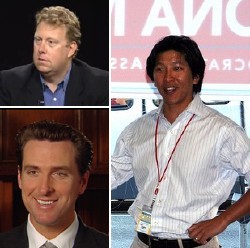 With the San Francisco Democratic Party endorsing progressive candidates and measures, new clubs with major corporate funding have emerged in recent days. Chinese voters in the Richmond report getting calls in Cantonese from the Democratic Party, urging a vote for District 1 candidate Sue Lee (although the party endorsed Eric Mar.) Consultant Tom Hsieh—whose firm made the phone calls—insists they were on behalf of the “San Francisco Democratic Club,” but was tight-lipped about who else is in that club. Hsieh, who is on the Party’s Central Committee, could lose his seat if the calls were indeed fraudulent—and at best, naming a Club like that is intentionally deceptive. District 1 voters also received a mailing from the “Richmond Reform Democratic Club” that pushed Lee—after the long-established Richmond Democratic Club endorsed Mar. In District 11, voters got a robocall from Scott Wiener—who identified himself as “former chair” of the Democratic Party—that pushed candidate Ahsha Safai. While that’s not deceptive, DCCC members cannot use their Committee status to promote candidates not endorsed by the party. Mayor Gavin Newsom won’t be attending the SF Democratic Party’s annual banquet this week (despite receiving an award)—opting instead to meet the “Coalition for Responsible Growth.” The group in question has a Republican President, and its chairman wants to take the City on a “sharp turn to the right.”

On October 24th, Eric Mar’s campaign alleged that Chinese-American voters in District 1 were getting phone calls in Cantonese supporting his opponent Sue Lee—and the callers said they were from the San Francisco Democratic Party. The calls originated from Tom Hsieh, a political consultant whose father was a San Francisco Supervisor—and who is part of the Democratic County Central Committee’s (DCCC) conservative minority.

Hsieh conceded the Chinese script reads “Democratic Party Club” when I asked him about it, but he said it was necessary for voters to understand—rather than a literal translation. The Cantonese word for Democratic—man ju—has broad meaning, he explained, so adding the word “party” before “club” is necessary for Chinese voters to understand the context. He said, for example, that the Chinese American Democratic Club’s characters in Chinese read “Chinese American Democratic Party Club” for the same reason.

Who is the San Francisco Democratic Club?

If Hsieh misrepresented the Democratic Party’s position, the DCCC by-laws clearly state he can be removed from office. But even if he didn’t, the obvious intent behind a “San Francisco Democratic Club” is to confuse and mislead voters. It reminds me of when Chris Daly printed a “progressive door-hanger” that (while not explicitly lying) gave the intended false impression that the SF Bay Guardian had endorsed Carole Migden.

Hsieh, however, insists that he did nothing wrong. “The San Francisco Democratic Party does not hold a lot of sway in the Chinese-American community,” he said. “This Club was started in response to the direction the Party has taken—from supporting legalized prostitution, voting against the Community Justice Center, and phasing out the JROTC. And it doesn’t mean every other Democrat must be silent. This is not the Politburo.”

But if the “San Francisco Democratic Club” is truly a concerned group of disgruntled Democrats who feel the DCCC has gone astray, Hsieh was not helpful in giving me more information. The club is not chartered with the Democratic Party—which requires at least 20 club members who are registered Democrats—so there’s no way of knowing who the club represents. Hsieh even said he wasn’t a member—and when I asked to get in touch with club members, he wouldn’t give out names. He did finally give me the name of the club treasurer: Mike Riordan, who works for political consultant Jim Ross.

One of Jim Ross’ clients is District 1 candidate Sue Lee. And Mike Riordan is running the field operation for “No on H”—whose $8 million dollar budget to defeat the Clean Energy Act is almost entirely funded by PG&E. And while Hsieh was not forthcoming about who is the “San Francisco Democratic Club,” online filings show a $30,000 check to the Club from PG&E, $2000 from the Chamber of Commerce, $5000 from GGRA (Golden Gate Restaurant Association), and $70,000 from the Committee on Jobs. All these donations were made in the last two weeks—and the club has no prior fundraising activity.

The “San Francisco Democratic Club” is not alone. After the long-time Richmond District Democratic Club endorsed Eric Mar for District 1, some members quit to start their own political club. On October 24th, voters in the Richmond got a mailing from the “Richmond Reform Democratic Club”—endorsing Sue Lee. The mailing recommended a “no” vote on Prop H and a “yes” vote on Prop V—the JROTC measure and soft-money conduit against Mar. And while practically everyone besides Mayor Gavin Newsom opposes Proposition P—a naked power grab on transit policy—the “Richmond Reform” club endorsed it.

Members of the Richmond District Democratic Club believe that David Heller—the Geary businessman who tried to recall Supervisor Jake McGoldrick because of transit policy—is behind this effort. Heller confirmed to me that he is a member of the new club, but is not on the Board of Directors. Unlike the “San Francisco Democratic Club,” the “Richmond Reform Democratic Club” does have its Board listed on their mailing. Jim Ross managed David Heller’s campaign for District 1 Supervisor in 2004.

But while the “Richmond Reform” Club is more transparent about its objectives than the “San Francisco Democratic Club,” its funding sources are remarkably similar: $18,000 from the Committee on Jobs, $5,000 from PG&E and $2,000 from BOMA. Again, if a group of disgruntled Democrats in the Richmond want to start a new political club, why did they pick such a similar name—besides trying to be intentionally deceptive?

Other Efforts to Undercut Party Endorsement

Even if they’re not being deceptive, moderates who were on the losing side of the DCCC endorsement votes have pursued tactics to undercut the official Party’s position. In District 11, voters last week received a robo-call from Scott Wiener—urging a vote for “Democrat Ahsha Safai.” The call listed some of Safai’s endorsements, like “Democratic Mayor Gavin Newsom” and “Democrat Fiona Ma.”

Which is perfectly fine, except Wiener identified himself in the call as “former chair of the San Francisco Democratic Party.” Article 2, Section 3 of the SF Democratic Party by-laws say the DCCC may remove any member who “knowingly utilizes his DCCC title to advocate or support a candidate not endorsed by the DCCC.” The Democratic Party endorsed John Avalos, and this rule has been around since long before progressives took over the Party. Wiener can promote his favored candidate, and can even point out the other Democrats who endorsed Safai. But he cannot use his DCCC title to do so.

Finally, the San Francisco Democratic Party will hold its annual fundraiser on October 29th—titled “Many Voices, One Vision.” House Speaker Nancy Pelosi and Congresswoman Jackie Speier will attend, as will most elected officials. But Mayor Gavin Newsom will not—although the Party will present him, City Attorney Dennis Herrera and Assemblyman Mark Leno an award for being a marriage equality champion.

It’s not unusual for the Mayor to turn down invitations, but it’s curious where he’ll be instead: at a meeting of the Coalition for Responsible Growth, where Newsom is slated to be the “special guest.” The group’s Republican president—Rodrigo Santos—has written about the need to bring “moderate voices to the Board of Supervisors,” and its chair—John Keogan—has called on members to help take San Francisco “on a sharp turn to the right.”

In 2003, Gavin Newsom beat Matt Gonzalez in the Mayor’s race after the Democratic Party endorsed him—and Democratic luminaries like Bill Clinton, Al Gore and others flew into town asking voters not to elect a Green Party candidate. Today, Newsom is actively undermining the Democratic Party’s position—while his allies are creating new Democratic “clubs” that appear designed to undercut the Party’s endorsement.