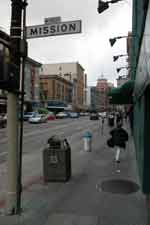 As the Board of Supervisors votes Tuesday on creating a Bayview-Hunters Point Redevelopment Area, scant attention has been paid to how this action restricts the democratic rights of neighborhood residents and businesses. Redevelopment Areas transfer power over land use decisions from elected officials to mayoral appointees and Agency staff, and ultimately suppress rather than enhance public involvement. Last week on 6th Street, we saw how this Redevelopment process plays out. In the election for members of the 6th Street Project Area Committee, a whopping 63 people voted among an eligible voter pool in the thousands. Why such a low turnout? Because after ten years of experience, residents, owners and businesses know that they have no control over what the Agency does in their community. This pattern of community disempowerment is endemic to Redevelopment, and will now be repeated in the Bayview.

The San Francisco Redevelopment Agency has done such a good sales job in its quest to create a Bayview-Hunters Point Project Area that, absent a shocking and unforeseen event, the Board of Supervisors approval on Tuesday is a done deal. Like the 1968 marketing of a “new” Richard Nixon that propelled a vindictive, physically unappealing red-baiter to the Presidency, the San Francisco Redevelopment Agency has overcome its long history of displacement, destruction and disenfranchisement by repackaging itself as the only strategy for improving Bayview.

We got a glimpse of what the post-Redevelopment future holds for Bayview from the May 3 election for the Redevelopment Agency’s South of Market Project Area Committee (SOMPAC). This is the committee that advises the Agency regarding the Sixth Street Redevelopment Area.

The Redevelopment Agency has been so successful at discouraging community participation and overruling neighborhood input that only 63 people bothered to vote in an election where an entirely new PAC was being seated. This total was reached in a community dominated by low-income tenants, and whose SRO’s contain a much higher percentage of African-Americans (from 30-40%) than the citywide average.

The community’s estrangement from the public Agency that controls its resources is magnified by the acute lack of interest in people even wanting to serve on the PAC. Of the eleven categories in which people or groups could run, seven featured only a single candidate.

In some of these unopposed races, interest was so high that the winner got only a single vote!

And for those in Bayview who believe Redevelopment will be a boon for existing 3rd Street retail businesses, come down to Sixth Street and see what ten years of Agency control have wrought. With more vacant storefronts now than when the Agency takeover began, it should not be surprising that only one retail business owner ran for the PAC and that only one person (likely the candidate) voted in the race.
To paraphrase the Mayor’s Housing Director’s claim that non-attendance at a hearing can be <"https://beyondchron.org/news/index.php?itemid=3178"> “a good thing”, perhaps the Agency sees the lack of candidates and electoral participation as confirmation that people are completely satisfied with the Agency’s work. A more logical conclusion, however, is that Sixth Street folks have wised up to the fact that their input is irrelevant, and no longer wish to lend credence to the charade.

Condo owners in the SOMPAC neighborhood are so fed up with the Agency that only one person ran for the two seats allocated to them. And this candidate was a write-in, who swept to victory with a total of three votes.

A total of 36 people voted for the SRO tenant representatives on the PAC. Considering that there are over 1000 SRO tenants currently living in the Project Area, that represents a roughly 3% voter turnout.

This is hardly what George W. Bush would describe as the March of Democracy.

In fact, one would think a greater number of tenants would end up at the polls by accident or chance. The numbers are so low that it appears tenants went out of their way not to vote.

Of the few who did bother to exercise the franchise, they at least made some good decisions. Teresa Dulalas, a SOMA resident engaged in a long battle to stop her family’s Ellis Act eviction, got more votes (33) than anyone for any race in running unopposed for the seat dedicated to a parent of a student at the Bessie Carmichael School (Disclosure: Dulalas is represented by attorneys with the Tenderloin Housing Clinic, publisher of BeyondChron).

The Filipino community dominated the voting, and groups such as Bindlestiff Studio, SOMCAN, and the South of Market Employment Center all won seats. TODCO, which owns hundreds of units in the Project Area, secured only 14 votes and failed to get on the PAC.

Sixth Street, like the Bayview, has a long history of political disenfranchisement. But the start of the PAC during the 1990’s brought hope and excitement to the area, as residents, owners and merchants were given the same time of promised benefits that the Agency now vows to provide in Bayview.

Unfortunately, over a decade and $100 million later, Redevelopment has left Sixth Street as troubled by problem street behavior as before. Many would view the area as suffering from blight, and would be shocked to learn that taxpayers had spent over $100,000, 000 to alleviate blight in a very small geographic area.

Redevelopment not only failed to economically uplift Sixth Street, but it has left community residents even more dispirited and alienated from the neighborhood. There was a time in the early 1990’s when residents really bought into the Agency’s promises; but years of broken commitments on such issues as crime prevention, the Plaza Hotel, and a rewiring program to allow SRO tenants to cook in rooms have left residents, business owners, and many nonprofit groups bitter and distrustful toward the Agency.

Proponents of Bayview Redevelopment believe that the millions the Agency will invest in the neighborhood is worth sacrificing control of community land use decisions Supervisors to mayoral appointees and Agency staff. Sixth Street Redevelopment shows how millions can be spent without much effect, while the loss of community control promotes a destructive passivity toward civic engagement among Area residents.

Watergate showed that the “new, new” Richard Nixon was no different from the old version. The inherent nature of the Redevelopment Agency is anti-democratic and disempowering, and it is fanciful that these spots can somehow be changed in Bayview.