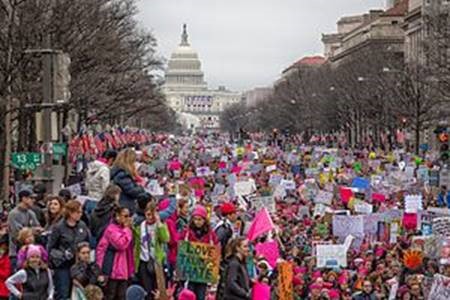 The Jan 2017 Women's March Started the Resistance Against Trump

Last night did not go as anyone expected. While by midnight Trump had not won a single Clinton state, and Biden still had a strong path to victory, few imagined the race could be this close. As I wrote on Monday, Trump lacked the element of overconfidence and surprise in 2020. Yet tens of millions voted to give four more years to a white supremacist whose mishandling of the pandemic has destroyed the economy and killed roughly 250,000 Americans.

I heard a top Trump campaign official say last week that they are backed by those who hate the same people as Trump. A sad but apparently true commentary on the United States of America.

As in 2016, Senate races where Democrats were favored and led in polls (NC, Maine, Montana, Iowa) went Republican on election night. Was there a single pundit who foresaw Susan Collins winning re-election in Maine? And yet she is on track to win.

While Biden remains favored as election night ends, the Democrats’ Senate prospects look grim. That’s a problem that few thought we’d have to deal with when the November 3 vote count began.