Dellums Shines – But Newsom Missing — at Conference of Mayors 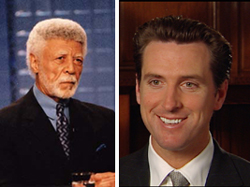 On January 28th, the San Francisco Chronicle described Oakland’s new Mayor, Ron Dellums, as the “go-to guy” at last week’s U.S. Conference of Mayors. It’s a stark contrast for a newspaper that last year belittled his candidacy after progressive activists recruited the ex-Congressman to come out of retirement and run. After the Chronicle chastised candidate Dellums for his “utopian vision” and lack of hands-on leadership, the paper now says that Mayor Dellums is “respected for coalition-building,” a “role model to younger mayors,” and even “the conscience of the nation” – as he urged other mayors at the conference to work together on fighting crime, poverty and health care access.

Meanwhile, the Chronicle failed to mention in their January 28th article that San Francisco Mayor Gavin Newsom did not even attend the Conference. The U.S. Conference of Mayors provides invaluable contacts for Mayors to pool their political clout, at a time when state and federal governments have turned their backs on cities. Newsom instead chose to attend the World Economic Forum in Davos, Switzerland — where intellectuals, movie stars and corporate C.E.O.’s rub shoulders.

In their Mid-Term Report on Newsom’s performance, the San Francisco People’s Organization called on the Mayor to “expand affordable housing revenues by capitalizing on his ties and reputation with the Democratic Party to leverage state and federal funding for San Francisco.” Founded during the Great Depression to help cities lobby for more federal aid, the U.S. Conference of Mayors plays a leading role in advocating for such an urban agenda. If Newsom is serious about “ending chronic homelessness” and fighting to make the City more affordable, the U.S. Conference of Mayors was the logical place to be.

Now that Democrats have taken control of Congress, this year’s Conference was more important than ever in leveraging the federal government for more urban aid. Democratic control of Congress isn’t something that we can take for granted — and if San Francisco wants to get part of the action, acting promptly and early will be essential. As a former member of Congress who served for over two decades when Democrats were in the majority, Ron Dellums understands this – but Newsom apparently does not.

Maybe Newsom felt that he didn’t have to go because our own Nancy Pelosi is now the House Speaker. But he can’t expect Pelosi to do his job as Mayor of San Francisco. Nancy Pelosi did attend the Conference of Mayors and delivered the Keynote Address, but it must have struck odd to the Mayors of Los Angeles, Chicago or Philadelphia (all of whom were there) that the House Speaker’s hometown mayor couldn’t be bothered to meet with them. Given that he was hobnobbing with world leaders in Switzerland, they probably even felt slighted.

Newsom’s absence from the U.S. Conference of Mayors further shows his disconnect from the everyday functions of being Mayor, as he already eyes a run for Senate, Governor or even President. Meeting with other Mayors to talk about getting more federal aid isn’t sexy or glamorous – but it’s essential to building a legacy. The World Economic Forum in Davos, Switzerland might be an appropriate place for a President Newsom, but not a Mayor Newsom. If he wants to prove that he’s a real policy wonk and not just a media celebrity, Newsom made the wrong choice about which Conference to attend.

Peter Ragone, Newsom’s communications director, defended the trip to Switzerland because getting invited to the World Economic Forum is a privilege not bestowed to just any Mayor. It’s true that Newsom became an international celebrity in February 2004 when he issued marriage licenses to same-sex couples, a bold step that put him in the public eye and made him a hero to many. But the real question is whether Newsom plans to use his celebrity status to get invited to an Economic Forum in Switzerland, or expend his political capital to help San Francisco leverage more federal aid.

Of course, there’s another place where Newsom could have been last week rather than at the World Economic Forum. He could have been at a Board of Supervisors meeting to comply with Question Time – as the majority of San Francisco voters have asked him to do. But if he had attended the U.S. Conference of Mayors, Newsom could have at least told the Supervisors that he was there to fight for the City’s interests – and that his meeting with other Mayors will help leverage significant federal funds for San Francisco.

Not only did Mayor Newsom slight the Board of Supervisors by attending the World Economic Forum in Davos, Switzerland. He also slighted the Mayors of America’s largest cities by failing to attend the U.S. Conference of Mayors. By not attending this Conference, Oakland Mayor Ron Dellums got to bask in the spotlight – and showed the rest of the country who really represents the Bay Area. Dellums helped put Oakland on the map, while San Francisco was missing in action.