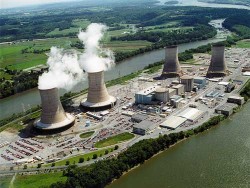 Those who continue to insist that President Obama would implement progressive measures if he only had 60 Senate votes (ignoring that he had this for most of 2009) will have a hard time explaining his move this week to launch the first nuclear power plants built in the United States since the 1970’s. Anti-nuclear power activism, coupled with the Three Mile Island near-meltdown, doomed the nuclear power industry, and major environmental groups have long opposed new plants. But as with Obama’s dramatic escalation of the war in Afghanistan (and the covert sending of troops to Pakistan), there was little outcry from progressives in response to an action that would have brought thousands into the streets if initiated by a Republican President. Is it not becoming clear that President Obama uses the 60-vote filibuster Senate threshold to justify inaction on progressive goals, while almost consistently acting against progressive interests when the 60 votes are not a factor?

Since the 1970’s, nuclear power has been a lighting rod for progressive and environmental opposition. In fact, for decades the chief public proponents of nuclear power were followers of cult leader Lyndon LaRouche, whose pro-nuke signs were commonly seen at the tables they staffed in airports.

During his campaign, Barack Obama said he was open to considering new nuclear power plants under the appropriate circumstances and as part of comprehensive climate change legislation. But in typical Obama fashion, the President implemented the conservative part of his energy agenda without a commitment from Republicans to back any progressive components of a climate change bill; not surprisingly, Republicans responded to Obama’s action by saying it “would have little effect on their votes.”

While the Sierra Club, Natural Resources Defense Council, and other groups voiced opposition, don’t expect environmental organizations to march and rally against the president’s action. After all, the multi-billion dollar government bailout of the failed private nuclear
power industry is now a fait accompli, and green groups still hope to get something from Obama in the future.

Consider the actions Obama has and has not taken that have nothing to do with Senate filibuster threats.

He gave $8.3 billion loan guarantee for a new nuclear power plant, with the federal government — not the banks — on the hook if the project defaults.

He signed an Executive Order creating a bipartisan budget commission, despite this not being backed by any component of the progressive base that won him the nomination and swept him into the White House.

He has thus far refused to make recess appointments of Craig Becker and other pro-labor NLRB appointees, but instead allowed the key agency to remain in a state of dysfunction with only two of the five legally required members. There may not be 60 votes for EFCA, but nothing stops Obama from rewarding labor’s support by making these NLRB appointments today.

He has failed to even nominate federal judges and U.S. Attorneys, and has allowed Republicans to delay over 100 appointments that could be made during the current Congressional recess.

He refused to insist on using the reconciliation process to enact the public option, and then allowed Joe Lieberman and Ben Nelson to so weaken the Senate health care bill that it became unsupportable in the House. All of this preceded Scott Brown’s election in Massachusetts.

Many progressives are so excited that Obama is not Sarah Palin that they accept any small step as a great leap forward. The irony is that many of these progressives saw a night and day difference between Obama and Clinton in the primaries, yet now accept policies from Obama that are virtually identical — if not more conservative — than those we feared from a President Hilary Clinton.

Progressives saw the November 2008 elections as rejecting the popular notion that the United States is a center-right country. Yet now we have progressives so fearful of a Tea Party takeover that they feel Obama must be defended at all costs, regardless of his betrayal of progressive campaign commitments.

This is a strategy guaranteed to produce precisely the rightward drift that these progressives so greatly fear. Bill Clinton’s shift away from his “Putting People First” campaign agenda did not help Democrats in 1994, and Obama’s renunciation of his “Change We Can Believe In” mantra will not save Democrats in 2010.

In The Activist’s Handbook, I quote a Greenpeace activist on the Clinton Administration: “The dirty secret is that we have been soft-pedaling this Administration because we hoped they would live up to their commitments. But it’s clear that they are either totally incompetent or are on the other side.”

I also quote the great Industrial Areas Foundation organizer Ernesto Cortes, Jr.: “It’s unfortunate that fear is the only way to get some politicians to respect your power … We got where we are because people fear and loathe us.”

We have not reached the point where the Obama Administration is “on the other side,” but it has clearly not been with progressives. And so long as President Obama has no reason to fear progressives publicly mobilizing even against his support of the once hot button issue of nuclear power, his betrayal of progressives will continue.