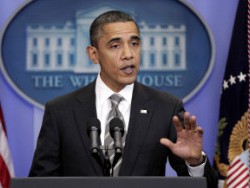 President Obama is expected to announce tonight that he will continue spending nearly $120 billion annually in Afghanistan rather than redirect these funds to help the American people. Of course, neither Obama nor the media will describe his decision to slightly reduce Afghanistan troop levels that way. The Obama Administration has worked hard to frame bringing home 10,000 troops now and 30,000 by the end of 2012 as a “major Afghan drawdown.” Obama is “making a more rapid reduction in forces than desired by commanders on the ground or his departing defense secretary, Robert M. Gates.” Progressives were apparently not included in Obama’s spectrum of solicited opinion. Obama’s military advisors are not only little different from the Bush Administration he once criticized, but the withdrawal of even 30,000 troops leaves about 68,000 – double the number sent by Bush. One heavily Democratic group Obama ignored is the U. S. Conference of Mayors, which overwhelmingly voted last weekend for Obama to end the wars in Iraq and Afghanistan and redirect the money to local governments.

President Obama’s defenders routinely blame Republicans for blocking what they argue is his desired progressive actions. But Obama unilaterally escalated troops in Afghanistan, and now has decided to continue funding a war despite rising unemployment and economic slowdown at home.

Obama’s support for a costly Afghanistan war may be his worst betrayal of a progressive agenda that previously saw him oppose the Iraq War. Even Republicans are split on Afghanistan, so that nobody can claim Obama is acting out of political necessity.

Most of the mayors at last weekend’s conference are Obama supporters. Their willingness to go public with their criticisms of the President’s budget priorities speaks to the depth of the crisis facing America’s cities.

Obama defenders have argued that he inherited the Afghanistan mess, and that money saved by greater troop withdrawals would not end up in the hands of local governments anyway. But Obama’s keeping 68,000 troops in a war without end contradicts months of campaign talk about his people-oriented budget priorities, and reflects a policy most voters in 2008 identified with John McCain.

Outgoing Defense Secretary Gates recently criticized the lack of NATO spending by European allies “willing and eager for American taxpayers to assume the growing security burden left by reductions in European defense budgets.” In other words, European nations realize that it is more important to house, educate and feed their people than it is to engage in endless military conflict, and Gates sounded resentful that these countries refused to follow America’s misguided budget priorities.

In 2002, Illinois State Senator Barack Obama opposed the U.S. invasion of Iraq, and then used this stance to win progressive support against pro-invasion Hilary Clinton. In light of Obama’s support for aggressive military action since taking office, one wonders whether his Iraq War opposition was based on personal belief or political opportunism.