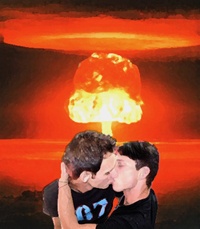 A gay ‘kiss-in’ on the UC Santa Cruz campus has been described by the Department of Defense as a “credible threat” of terrorism. It is but one of several instances of spying culled from Defense Department documents by Lisa Myers on NBC News. Dixon Osburn, Executive Director for the Servicemember Legal Defense Network, also noted the Department of Defense confirmed Air Force officials proposed developing a chemical weapon for turning the enemy gay. The Air Force report says development of a weapon to change people’s sexual orientation would “destabilize the enemy.” The Department of Defense database underscores the vast network of protesting organizations across America. It also identifies the serious compromise of basic rights constitutionally guaranteed all Americans.

Their database indicates spying activity gave them information regarding a planned protest at the Sacramento Military Entrance Processing Station on November 11, 2004. The proposed incident is called a “threat” and “credible.”

At New York University, the law school’s gay advocacy group, OUTlaw, was classified by the Pentagon as “possibly violent.” OUTlaw Co-chair Rebecca Fisher told the Washington Blade, a D.C. gay based publication, “I was shocked to read that OUTLaw was classified as a threat and investigated.”

“Since we still don’t know how the Pentagon went about investigating us, I’m wondering how far they went in invading our personal privacy to make their determination,” Fisher said. “Did they read our e-mail? Monitor our meetings?”

NBC News also reported Pentagon investigators had spied on groups at the State University of New York at Albany and William Patterson College in New Jersey. Their primary concern is opposition to the “Don’t Ask, Don’t Tell” policy used against gay men and lesbians in the military.

“The Pentagon is supposed to defend the Constitution, not turn it upside down,” Osburn said in a statement released Dec. 20. “Students have a first amendment right to protest and Americans have a right to expect that their government will respect our constitutional right to privacy.”

Of the Santa Cruz protest, Osburn said, “To suggest that a gay kiss-in is a ‘credible threat’ is absurd, homophobic and irrational.” “To suggest the Constitution does not apply to groups with views differing with Pentagon policy is chilling.”

The Air Force research into turning people gay was initially reported in 1994. The proposal, part of a plan from Wright Air Force Base in Dayton, Ohio, was to develop “chemicals that effect (sic) human behavior so that discipline and morale in enemy units is adversely effected (sic). One distasteful but completely non-lethal example would be strong aphrodisiacs, especially if the chemical also caused homosexual behavior.” Responding to criticism, Defense Department officials would later say they never intended to develop the program.

“The Pentagon seems to constantly find new and more offensive ways to demean lesbian, gay, bisexual and transgender people,” said Osburn. “First, we were deemed unfit to serve our country, despite winning wars, medals and the praise of fellow service members.

Then, our sexual orientation was suggested as a means to destabilize the enemy. Now, our public displays of affection are equated with al Qaeda terrorist activity. It is time for new Pentagon policy consistent with the views of 21st century America.”

NBC News made portions of the Defense Department database public. It is located here.