Decline of the Suburbs 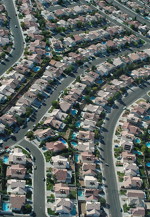 For those who are considering homeownership, the suburbs have long represented a traditional notion of the American dream: From pleasant neighborhoods to well-kept lawns to gleaming picket fences, the ‘burbs have traditionally been depicted as a wholesome and desirable way of living. But in recent years our national love affair with the sprawl has suddenly begun to decline. The growth of suburban crime and poverty has taken its toll on the neighborhood residents, but there are other factors at work, too. Studies show that people are steadily less inclined to own cars, and they instead crave the easy convenience of reliable public transport. The national population of children is declining, and young, childless couples are taking advantage of what the city life has to offer.

Businesses are widely opting out of setting up shop in suburban business parks, keeping offices—and jobs—relegated to urban areas. For many, buying homes is being eschewed in favor of renting—while the cost of urban renting has steadily increased, so has the desire for easy, city living without the risks and costs of homeownership. It seems that the neighborhoods that used to represent a classic American idealism are now being transformed slowly in a ghost town sprawl.

This piece was first published at Insurance Quotes.