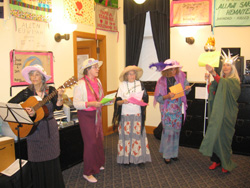 About 25 activists gathered at the Office of Supervisor Chris Daly yesterday to display the Code Pink Peace Ribbon Quilt, and to kick off the Declaration of Peace Week of Action. The Declaration, which has been endorsed by over 180 peace and justice organizations throughout the country has three basic platforms: (1) bring our troops home now, (2) establish a plan to end the war in Iraq, and (3) prevent future U.S. invasions such as Iran, Syria or North Korea.

The festivities kicked off with 5 grandmothers called the “Raging Grannies,” who entertained the crowd with a series of songs like “Please Tell America, Bring the Troops Home” (sung to the tune of “God Bless America”), “Will the Bill of Rights Be Unbroken” (sung to the tune of “Will the Circle Be Unbroken”), and even a version of the “Hokey-Pokey” (with catchy lines such as “you put the peace in – you put the war out.”)

“We believe that there is a connection between the violence in Iraq, and the violence on our streets,” said activist Vickie Leidner of Code Pink. “Remember that the peace movement can be a peace movement at home.” Code Pink was founded in response to the Bush Administration’s cynical manipulation of color-codes of danger by the Department of Homeland Security, and has been effectively spreading the message of peace and social justice through rallies, protests and direct action.

Supervisor Daly’s office also featured Code Pink’s Peace Ribbon Quilt, which includes over 150 patches commemorating the U.S. soldiers and Iraqi civilians who have been killed in this unjustified war – including Casey Sheehan, the son of prominent anti-war activist Cindy Sheehan. “I can think of no more relevant and no more humanistic display of the horrific war in Iraq,” said Daly, “than this quilt.” Daly went on to compare it with the AIDS Quilt that was created in the 1980’s to commemorate victims of the AIDS Epidemic.

“The Declaration of Peace is a nationwide project,” explained organizer Elizabeth Boardman. 320 different activities are being scheduled for the upcoming week in 40 different parts of the country, including places like a small military town in North Carolina. Locally, activities will include direct actions at the Bechtel Headquarters downtown (who have massively profited from government contracts in Iraq), and a trespass at a local Military Recruitment Center on Monday. Next week, the monthly San Francisco Critical Mass bike ride will focus on targeting gas stations to prevent cars from feeding the oil companies who have spurred the Bush Administration into war.

For more information on the week’s events, or to get more involved, check out http://www.declarationofpeace.org