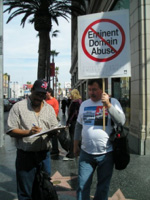 Those concerned about the misuse of eminent domain were encouraged by the circulation of a statewide initiative (Prop 90) to address the problem. Unfortunately, the initiative’s backers sought to capitalize on rising anti-eminent domain sentiment by inserting a sentence jeopardizing the future enactment of most land use laws, including amendments to San Francisco’s Rent Ordinance. This sentence—which allows property owners to sue government entities over any new law that reduces their property values—overwhelms the good part of the initiative. Prop 90’s specific language limiting eminent domain made this broad sentence unnecessary, raising questions about the motives behind November’s “Protect our Homes” initiative.

Christine Minnehan of the Western Center on Law and Poverty is the chief—and indispensable—advocate for tenants in Sacramento. Minnehan has expressed deep concern about the impacts of the “Protect Our Homes” measure, particularly regarding future amendments to local and state laws protecting tenants. Minnehan writes:

Last week, the Anderson eminent domain initiative, known as the “Protect Our Homes”, qualified for the November ballot. While this measure is ostensibly about eminent domain, it contains a very broad clause, authorizing litigation if government actions cause a substantial economic loss to ANY property (Section 19(b)(8) of the attached.) There is an exception for governmental actions to protect public health and safety, but no exception for the public welfare, environmental protection or economic regulation.

On its face, Prop. 90 would appear to create a damages action against a government agency for various kinds of economic regulation including inclusionary zoning, environmental protections and rent control. The attorneys for the steering group for the Anti Prop. 90 campaign, believe that the damages claims could be so large that government agencies would be unwilling to enact, implement or continue to implement these policies.

Prop. 90 does contain a savings clause to protect existing law. However, since future government actions include resolutions, it appears that future discretionary actions to implement existing law would trigger liability. In any event, any new laws would certainly be covered. Additionally, since the measure, if approved, would take effect in November, any laws passed in this session of the Legislature that don’t take effect until January would be subject to the measure.

Members of the Anti Prop. 90 steering committee think that the measure represents so radical a view of property rights that those rights would trump the right of the public’s elected representatives to act in the public welfare.

Not specifically mentioned in Minnehan’s analysis is that future limits to the state Ellis Act would appear to subject government entities to Prop 90 lawsuits. Overall, Prop 90 seems less an eminent domain reform initiative and more a product of property-rights zealots opposed to reasonable land use controls.