Dean and Me: Roadshow of an American Primary 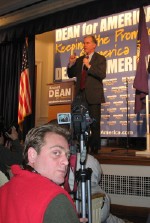 Hello from Vermont! My name is Heath Eiden. I am the director of the film “Dean and Me: Roadshow of an American Primary.” I’m appealing to progressives everywhere because our film isn’t just about Howard Dean and our comedic primary process. It’s about us.

It’s about the people who set aside time in their own busy lives to work together on issues that are much bigger that ourselves. It’s about the common goal we have of restoring our country so that the children at least have a chance to thrive in the kind of America we know exists under the current bondage of war and the profiteering that always goes with the killing.

If there are so many in Washington, D.C. who wanted Howard Dean out of their Cocktail Party, there must be a reason for it, right? It may go as far back as 2003 when he stood up alone on a soapbox for us in the public square and declared, “I’m here to represent the Democratic wing of the Democratic Party!”

The other night I participated in a national conference call celebrating Democracy for America’s fifth birthday and their new mission to focus on healthcare reform. You could feel the excitement in the air. Howard Dean is speaking with us again! I’d not felt it since 2004. The same leader who led the coup d’etat to take back the Democratic National Committee for the people came back from Washington, D.C. with the same integrity he left with, if not more so. Now that’s impressive.

As Randy Shaw wrote here recently (Howard Dean’s Return to DFA Can Spark National Activism, March 9, 2009), “Dean’s return to DFA could not have come at a better time. Not because the organization was flailing in his absence, but rather because he brings a fundraising prowess and star quality that will enable the group to rise to a greater level of effectiveness.”

It’s time for us to stand up for Howard Dean again.

Here’s my plea to you:

My wife and I are at the end of our rope. We sold 16 acres of Vermont farmland to a developer to keep this film alive. Apparently, it wasn’t enough. We have no more land to sell. We need your help.

For the past year, “Dean and Me” has been touring film festivals even though the film isn’t finished. I hitched a ride down to President Obama’s inauguration to get the last shots that, ironically, will be the opening scene of the film.

My production team, Emmy award winner and chair of the SUNY Purchase Film School’s Iris Cahn (editor and co-producer), and Guggenheim Fellow, Emmy winner and SUNY Purchase’s Deanna Kamiel (co-producer), have worked for “progressive cause rates” for the past five years. In Deanna’s case, that means she hasn’t paid a dime.

We’re not asking for a handout. We’re offering you a chance to help add one more tool to our progressive arsenal by pre-ordering the film for whatever you can afford.

Our needs are listed here. We have to raise $25,000 to complete the final cut. Wouldn’t it be great to finish the film the same way Howard Dean turned the Democratic Party establishment on its head back in 2004 with small donations from regular folks?

For a $40 minimum, you’ll entered into a raffle for a free week stay at a fancy hotel in Buenos Aires, Argentina.

This historical archive of our community’s progressive action is important. A tragic comedy shot in Cinema Verité, the film is packed with celebrities (listed at our web site) but the real stars are you.

This is your film. This is one of our time capsules.

Please check out our website for video samples of the style the footage is shot in, reviews, endorsements, film festivals and media testimony. If you really want to get into the director’s head about how this all started, check out the diary at our blog.

Will you help us wrap this up so we can get it out there as part of our historical record?

So many are trying to write history the way they want it to read. Let’s not let them get away with it. Thanks so much for listening.