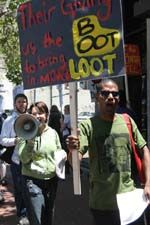 The Civic Center residents recently formed the Civic Center Hotel Tenants Association (CCHTA) to save their homes from demolition and bring the building up to code. CCHTA is made up of low-income, long-term, mentally ill, people of color, families, senior and disabled residents. They have picketed twice in front of the Plumbers Union and signed a petition of over 100 residents opposing the demolition and the lack of compliance of the earthquake retrofit. The city attorney picking up the case is good news for the Civic Center Hotel residences, who are tired of being in an unsafe building under threat demolition.

The case has taken on additional importance after the unfortunate events of Hurricane Katrina, which left San Franciscans asking if we’re prepared for an earthquake. In the case of the Civic Center Hotel, not only are they unprepared, but the building is a Level 4 unenforced masonry building. This means that if a major earthquake occurred, it would demolish the whole building. This put the residents’ lives at great risk but also it shows the lack of concern of the Plumbers’ Union for their residents.

“Given the events surrounding Hurricane Katrina, we hope all parties will make all attempts to avoid the kind of managerial class negligence which can lead to similarly tragic failure to plan for disaster, in particular, the seismic events that San Francisco has and will experience,” said an excerpt from a letter drafted by the CCHTA given to DBI, Mayor Newsom, Larry Mazzola and the Board of Supervisors. “We don’t want our homes and our lives demolished either by the Union or by an earthquake ”

It seems apparent class differences are responsible in part for the lack preparedness and response for Hurricane Katrina and the lack of the compliance of the Plumbers’ Union to complete the earthquake retrofit is stark. The Civic Center Hotel is made up of low-income tenants similar that of New Orleans population that was affected by the Hurricane. There was a lack of preparedness even though there was knowledge that New Orleans could be under water if the proper precautions were not taken. In San Francisco, its not a matter of if there will be an earthquake – it’s a matter of when, leaving the tenants of Civic Center Hotel very vulnerable.