Day of Prayer is a Stupid Idea 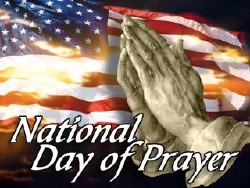 The upcoming May 6 “National Day of Prayer” has been declared unconstitutional by Judge Barbara Crabb in Wisconsin’s Federal District Court (“an inherently religious exercise that serves no secular function in this context”), but that apparently isn’t going to deter President Barack Obama from recognizing it in some fashion.

Last year, he did it with a proclamation. If he has any sense at all, he won’t repeat the same mistake this year. Obama has no reason to suck up to fundamentalists. He should do the right thing and take a firm stand for separation of church and state.

The idea of a national day of prayer has been with us off and on since the days of the old Continental Congress, but it wasn’t officially enacted into law by Congress until 1952. In 1988, President Reagan designated it as the first Thursday in May. He may have ignored AIDS, allowing untold numbers of gay men to die, but Reagan always sucked up to his fundamentalist base.

Former President George Bush did likewise: he shamelessly held a religious service in the White House on National Day of Prayer that the Los Angeles Times once characterized as “a big public endorsement of evangelical Christians.”

Prompting me to wonder what Bush prayed for: more bloodshed in the Middle East, and more profits for his corporate buddies? I bet many of his followers prayed for the death of doctors who do abortions and queers who push that good ol’ “gay agenda.” In America, you can’t go wrong waving the flag and the cross.

It’s time to turn the tables on the religious right.

Atheists, agnostics and other nonbelievers (about 16% of Americans, according to the latest study) should seize the moment and declare the day as our own, a “National Day Without Prayer.” On the first Thursday of next month, we should wear t-shirts and buttons declaring ourselves free from religion.

We should hold rallies and events throughout the country to urge America to become a nation that puts its stock in reason, not superstition. A national day to celebrate evolution, science, medicine, learning and human sexuality in all of its rich diversity (gay, straight and everything in between). We should also use the opportunity to remind the world of the “contributions” of the various and sundry religions of the world: Inquisitions, crusades, pogroms, holy wars, physical and sexual abuse, burnings at the stake, intolerance, conquests, etc.

It could ultimately become an annual nonbelievers coming-out day, an opportunity for thousands to finally reveal themselves to their families, co-workers and even those they ride to work with on the train. “Mom, dad, guess what?”