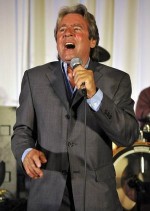 The former Monkee is intelligent, astute and very amusing. He talks a mile a minute. It’s hard to get a word in edge wise when you trying to talk to him. But, it fully works for me. I found him to be refreshing with his “I’ll make up my own mind with my career choices.” Davy started out in show business when he was about 11 years old. That was on Radio in England. From there it was non-stop for him. Before the Monkee’s, he was an actor, singer and all around performer. He was the original ‘Artful Dodger’ in the Broadway production of ‘Oliver.’

He makes you feel easy and relaxed being around him. There doesn’t seem to be a phony bone in his body. He cracks jokes so fast that it is hard to write everything down. But, I tried.

Naturally being in the entertainment business for so many years – it is not surprising that he’s had lunch with Judy Garland and Peggy Lee was a favorite and a friend, among others. And we’re not talking “Facebook Friends” – these were real flesh and blood friends. “However, Peggy Lee always seemed to be so needy” – he says. Of course, there was not even the Internet then – so it was easier to make friends. And that is what he still does make real friends.

I asked him if he and the group wrote the song ‘Porpoise’ – “No, that’s a Carole King song. She wrote some great songs – but in my opinion – song-writers should not sing their own songs.”

At the beginning of the interview I said: “Let’s do something different instead of I ask you a Question and you Answer.”

His Dad wanted him to be a Jockey. Davy is kinda short (like me) – actually he’s a little taller than me. “Well — I like horses and love to ride them. My Dad didn’t push me into it. I loved doing it, and still do.”

I told Davy about the YMCA in the Tenderloin where they have a senior fitness exercise program. They start each program with the hit song of the Monkee’s — ‘Day Dream Believer.’ Here’s a lyric: “Cheer Up Sleepy Jean”. It really gets the seniors off to a rousing start. – “You know what? That’s the kind of thing that I like to hear. I might just drop in on them unexpected. I’d love to see that.” – Davy said.

Davy Jones is still busy with his career. He does a lot of voice-over work for The Disney Studio, plus he appears at many venues with his Band. Sometimes in rooms that hold a couple of thousand people and more intimate Rooms like the Glam RrazzRoom. He will have his ‘hot’ band with him as always –and they sing along with him on some songs adding another level of vitality. Hey – were talking MegaWatt stuff.

I didn’t get the feeling that Davy is afraid to push boundaries. He still has that adventuresome way about himself — as he did when the Monkees were joking around. And that is what made them so endearing. Will they ever get back together? “There is some talk about it?” – Davy sez.

TOOT! TOOT! A TRAIN OF NO RETURN

First off you are overwhelmed by the sound of a train coming down the tracks. You get an uncomfortable feeling that you might even get run over by the fast speeding train. Then the lights come on – and you are looking at a rundown Apartment with kitchen appliances that look like they came from the dump. Spartan kind of fits the look. And it is a depressing look. I have seen places like this myself – and it is not a cozy feeling.

Who lives here? Well, we find out that the man called (Black) is an ex-con, ex addict and a born again preacher. I don’t know about you – but the minute I heard that a preacher was going to preach for me I would have headed for the door.

But alas – no luck to Mr. (White) – a professor of some sort who finds himself locked in the one room apartment with the insistent (Black) who won’t let (White) leave. Yes, he did save the unhappy Professor from jumping in front of the ‘Sunset Limited’, which would have limited his life, but the Professor has fallen into a new kind of purgatory (too much talk.) An interesting part of this tic tac toe conversation is that the preacher wants to save the professor that doesn’t want to be saved. Also – it seems that he is trying also to save himself.

Well, what happens now? They talk. And boy, do they ever talk. It’s cat and mouse conversation — and ‘Jesus’ is constantly on the menu. This is a big year for ‘Jesus’ plays. Everyone seems to write one. Will Jesus get a “Tony Åward?” Maybe the actors will – but the playwright (who wrote (No Country for Old Men’) needs to enlarge the play. The two actors on the stage certainly give amazing performances. I don’t know how they remember all that dialogue. It’s a miracle that even Jesus would not be able to do. However – the play just misses being a big, surprising hit. It’s pretty predictable.

They sit at the old Formica table and drink coffee and eat a little. They stack up words like so many dominoes. And hope, despair and eventually the spiritual stuff just isn’t working. And at last – the audience is freed from the tenseness. Worn, no doubt to a frazzle. I mean after all this angst — you want to throw them both under the train. The only thing that keeps your eyes open is the occasional rumble of a train going by.

Here’s the deal. The acting is superb. Some of the best I’ve ever seen. The set really gives us those subtle hints on what is going to happen. And the direction is decisive and unobtrusive. But — the minimal action drives us into a catatonic state.

THE MAGNIFICENT ACTORS: CHARLES DEAN AND CARL LUMBLY. THE DIRECTOR – BILL ENGLISH REMINDS US AGAIN WHAT A FABULOUS DIRECTOR HE IS.

AT THE SF PLAYHOUSE: http://www.sfplayhouse.org/