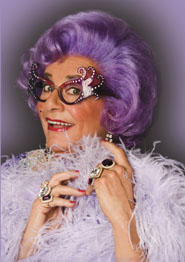 Or as Godzilla, the Guv, Might say: An Interview with a GirlieBoy. It was swell it was great.it was grand! The splashy landing of Dame Edna was at the elegant, fabulant, exoticlant Ritz Carlton. This hotel is so unique that you have to go up to go down. For instance, when you want the 3rd floor after arriving at what you would think was the main Floor – you are directed to the elevator and instructed to push button three.

Ok.no problem, except three takes you to the basement. Oh, it’s a plush basement to be sure. The waiting room was furnished in a style befitting Dame Edna. with just the right touches that you would expect from a Ritz Carlton. Silver glittered everywhere – holding mellow coffee, rare teas – and of course, someone running over to pick up every sugar wrapper – left on the table. I agree with them – I just hate seeing sugar wrappers sitting around. How un-Ritz. In the waiting room were the usual suspects. There was a guy from “Where Magazine”.Channel Five was there and the TV Reporter was wearing a strange combo of clothes that must have sent Dame Edna to the eye doc to get new glasses.

And of course, who swept in? You guessed it.the “Hat Lady” – Of course we all heard her voice before she even got to the basement. “Hi – I’m Jan Wahl she said”: She’s met me a million times before, but always pretends it’s the first time. And yes, I let her use me to get her name out there one more time.

We were the intriguing atmosphere people (as they say on the movie set). Bring the atmosphere in for the Dame Edna take. In the room were all these doors, and people kept coming and going somewhere. It was like an English farce. Could I have stumbled onto the set of “Noises Off” and not realized it? Suddenly – without much fanfare, we were summoned down the hall to another room – with folding seats neatly lined up in front of a stage. The T.V. station took tests to get just the right lighting. One of the crewmen sat on the throne like chair that was there for The Dame. Trying to get his moment of fame.he quipped: “Hello all you Possums out there.” Using one of the Dame’s lines. No one seemed to laugh – so I guess he’ll have to stick to being behind the Camera – not in front.

And then it happened – the Ritz Manager Christophe introduced the Dame. Something about we are so pleased to have this great international star here at the Ritz Carlton. “I now give you Dame Edna. Well, I have to tell you – she had on more diamonds than they have at Tiffany’s. It was blinding. Between the winged diamond glasses and her purple hair.I was becoming psych-a-delic. “I wore the cheapest dress I had,” she said. “The reason I did that – is because it’s the kind of dress that even a San Francisco Housewife could make.” When a reporter from Contra Costa asked a question she said, “What’s your name.” He said “Pat”. .”Oh hello Pat – I remember you, but you haven’t lost any weight, have you darling?”

Dame Edna, who is really Barry Humphries – is the drag version of Don Rickles. She has a tongue as sharp as a tack and jumps on every opportunity to slash you with it. “With the greatest kindness”, she says. Why do you think I didn’t sit in the front row – where she could zero in on me? Humphries was “Bruce The Shark in the movie “Finding Nemo” – could that have been type casting? He started his career in 1952 in “Call Me Madman” — and I guess the Madman stuck, because years later he has evolved different characters into the extraordinary Dame Edna, and has become an ‘internationally celebrated Megastar’. Other gems from Dame, in addition to the one’s that she is wearing. About Union Square. “I was walking around this wonderful City today and stumbled into what was known as Union Square. What’s that old-fashioned word? Ruined.” About that there was a loud machine noise coming from another floor. “That’s someone on the 13th floor using a hairdryer” Dame quipped. That’s the marvelous thing about this actor – he is quick on the uptake and studies the locale where he is appearing – so that he can make it more personal. About his new show “Dame Edna – with a Vengeance” – “It’s a bit like an updated Fiddler”, Dame sez. “There’s also a bit of Lizzie Borden in the show. I will be at the Koran Theater (Curran).” She also revealed that there are new songs in the show. “Songs you will leave the theater trying not to whistle.”

On October 4, Dame Edna will be doing a special “A Conversation with Barry Humphries” AKA/ Dame Edna at the New Conservatory Theater moderated by one of America’s most talented playwrights Terrence McNally. It’s a benefit for the NCTC Youth Programs. A catered reception will follow the program. For more info call 861-8972. Show starts at 7pm.

You’ve seen him on “Six Feet Under. He’s been in several Broadway Shows and won a Drama Desk nomination for Best Actor in a Musical, “Forever Plaid.” Jason Graae is probably the most versatile actor that I have seen in years. It’s just too bad that people are just not aware of some of the tremendous talent that is out there. And if you are not aware of Graae.then it is your loss, because he is probably the most entertaining singer/comic to come to town in many, many years. As a matter of fact, I can’t think of anyone who has been to this town that could do what Graae does in a lighting fast evening of fun, love songs and funny songs.

Graae has a way of making the audience feel that he is performing just for them. Like it was the first time. He exudes sincerity, and the audience responds by giving him love back. Even the lighting guy at The Empire Plush Room, Brian said – “It was so funny – my jaw is sore from laughing.” He lived in Tulsa for a while and says about that. “Did you know that Tulsa spelled back-word is A Slut?” One of his funniest songs is “The Moment Has Passed”. He sang it to a couple of guys in the front row – and it is hilarious. You really have to be there. Trying to tell you about all the ins and outs of the song – would not do him justice. Then there was the lovely song – make that most lovely song that I have heard in a long time, the Theme From “Tootsie” by Marilyn and Alan Bergman”. Also enjoyed “All I Care About is Me”. But this will truly blow you away. “Blow Me a Kiss” by Goldsmith/Kraft. The words are deviously naughty. Not many people could do this song right – but the right guy is singing at the Empire Plush. Jason Graae is the funniest guy in town – or any town. His show is packed with impressions; jokes and songs sung like you have never heard them before. He’s a knockout and a must see! RATING: FOUR GLASSES OF CHAMPAGNE!!! Jason Graae is awarded the Lee Hartgrave Fame Award for Best Show, Best Actor, Best Comic and Best Singer.