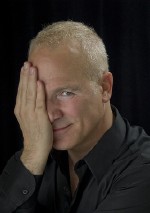 It was a night to remember. The house was packed to the walls and the excitement in the air was like a Tesla experiment. Starting a little late, because of all the technical stuff that had to be just perfect and synched for the Live C.D. performance.

Then, he appeared. His handsome, chiseled face captured the audience even before he opened his mouth. The stage presence was like 40 million LCD lights that just turned on.

And when he does sing – the beautiful voice takes over. The secure high register and the dark, masculine middle chest voice soar him to dramatic moments. D’Ambrosio is so talented in so many venues – an actor in movies (Godfather) Stage (Phantom of the Opera), nightclubs and TV. Ambrosio not only sings in English, but also treated us to a couple of songs in his Native Italian. This showed how he could sing in a variety of styles and eras. But no matter what style – each song is seductive.

In the Audience were many Celebrities, including Ice Prince Brian Boitano, who was sitting in the front row. He of course, was quickly recognizable.

The C.D. will be called “I’ll Be Seeing You.” Some think (including me) that the War Years were the best of times. The music then was real music. Not electronic gimmicks. These World War ll songs sure bring back the memories, as he sang “Long Ago and Far Way”, “Oh How I Hate To Get Up In The Morning”, and that tearjerker “I’ll Be Seeing You.”

MADS TOLLING PERFORMS AN ECLECTIC MIX OF MUSIC from Jazz to Country. Ponty wrote much of the music, — but some were written by Tolling and others.

But, it is Tolling’s performance that is so capturing. He not only plays that violin – he makes love to it. Tolling is absolutely brilliant. Well, that’s why he won a Grammy Award. He pushes the boundaries of live performance.

Tolling completely captures the audience with magical flights of imagination. We don’t know how his mind works – but the music keeps you on the edge of your chair. He is the most passionate musician that I have ever seen on a stage.

The handsome and charming Tolling is Danish. That added to the performance as he played the fun song “New Country” and “New Country” – both have C &W flavor and plenty of it. Love “the Contemplator (Tolling). As he plays – you envision sweet Ocean Breezes blowing through your hair. Wish I had some – Hair that is.

Later in the set he throws in a Chick Corea song called Armandos Rumba. Chick wrote the song for his Son, Armando. Tolling turned it into a mini concerto.

Near the end of the show Tolling gave us “Godson Song” by Bill Frisell. Played C&W style. Just close your eyes and you will hear the cry of wild horses among towering pine trees.

And, as a bonus. In the front row was a young 15-year old boy with his father and mother. Tolling introduced the boy, Gabe Gladstein to join him on the stage and handed him a violin. Tolling asked the lad if he wanted some sheet music. Gabe said “no!” He amazingly played along with Tolling like a veteran. What a terrific performance. Take my word for it. This boy is going to be a BIG star. (NOTE: A Chronicle reporter ran after Gabe in the Lobby to get the correct spelling of Gabe’s name. It will most likely be in Friday’s paper).

In case you want to hear some of Gabe’s music – go to: http://www.gabegladstein.com/

Mads Tolling has some great C.D’s – you can find them on Amazon.Com. The above show was at:
http://www.therrazzroom.com/

MARTHA REEVES IS STILL DANCING ON THE STREETS

There are no flies on Martha Reeves. She moves too fast. Reeves fronted the Motown group Martha Reeves and the Vandellas. Over many years she has performed with greats James Brown, Dusty Springfield and Marvin Gaye – just to mention a few. And along the way she was inducted into the rock’n ‘Roll Hall of Fame.

She’s had a bunch of hits like ‘Heatwave’ and ‘Dancing in The Street’. Now in her higher 6 0’s she still performs like she’s in her thirties. She’s quoted as saying: “s doesn’t seem to be slowing down or call I’ve lived my life looking forward to appearances. It’s the fun times of performing before an audience. I can’t wait to hit the road again.” And indeed –she is hitting that road and headed for SF for another show at the Rrazz Room.

She’ doesn’t seem to be slowing down or call it quits. She’s still the ‘Lead Queen’ on the Motown circuit. Her legend goes with her, with dozens of albums, movies and – all those great memories.

Talking to a reporter – she recalled: “When we were kids – we used to ‘Dance in the street’. Some people called us Vandels (because of the name Vandella. There were some occasions when the local Police would let residents block off whole streets. There weren’t any C.D’s of Ipods or Ipads then – just records.”

She has said many times “Della Reese is my idol and always will be. We used the ‘Della’ as part of the Vandella name.” She fondly tells everyone that her life is the ‘Best Party’ that she has ever been to.

I’ve seen Martha Reeves before – and let me tell you…. she puts on a marvelous first-rate show with stunning on stage charisma — that rewinds us to the days of real music.

Part Mommie Dearest and part Horror story. Natalie Portman plays a neurotic Ballet Dancer who is overwhelmed by her Stage Mother. Also, she has a rival that is even more evil than the mother. Beautifully filmed. Gorgeous to look at and will be high on the Oscar list. Rating: Four Boxes of Popcorn!!!! (highest rating) –trademarked-

Everyone loves stories about ‘Royals’. I know that I do. In this story the ‘King is a mess’. He stutters and screams and yells at his speech coach, who is trying to help him. Colin Firth as the Duke of York does the stammering. Geoffrey Rush plays the unconventional Speech guy who is trying to help the Duke. A very intriguing movie, but no one hardly leaves the Castle. Wouldn’t hurt to get some outside air. Still. Great movie. Rating: Four Glasses of Champagne!!!! (highest rating) – trademarked-.

Would John Wayne like the remake? Not likely. In 1969 John Wayne was the star. Joel and Ethan Coen decided that they could make a better movie. And they did just that by hiring Jeff Bridges and Hailee Steinfeld. She plays the girl who seeks a lawman to get revenge for her father’s murder. Get out those chaps…cause Bridges is riding high. And he might even ride in on Oscar.