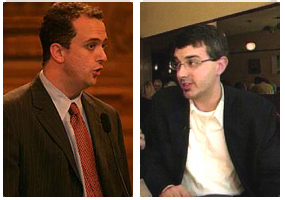 District 6 Sup. Chris Daly introduced another progressive call yesterday with the introduction of File 060271, “Resolution urging Representatives Nancy Pelosi and Tom Lantos to add their names to the list of Representatives sponsoring HR 4232, the End the War in Iraq Act of 2005, introduced by Representative Jim McGovern; and urging Senators Diane [sic] Feinstein and Barbara Boxer to file legislation to the same effect in the Senate.” Sup. Daly’s Resolution is co-sponsored by Sups. Tom Ammiano and Ross Mirkarimi.

When I spoke with Beyond Chron’s Casey Mills yesterday morning, I predicted Sup. Sean Elsbernd would sever the Resolution from the agenda for items to be considered for adoption without committee reference — what a wild guess. That’s exactly what Sup. Elsbernd did, and upon the second reading of the Resolution Elsbernd moved that the item be continued for one week. Without waiting for President Aaron Peskin to ask for a second, Sup. Michela Alioto-Pier seconded Elsbernd’s motion.

The House Resolution is sponsored by James P. McGovern (D-MA, District 3) and was introduced at the 1st Session of the 109th Congress, its full title being “To prohibit the use of funds to deploy United States Armed Forces to Iraq,” and that’s the intent of HR 4232, to prohibit the allocation of funding for the War in Iraq. As stated in subsection (a): “Except as provided in subsection (b), funds appropriated or otherwise made available under any provision of law may not be obligated or expended to deploy or continue to deploy the Armed Forces to the Republic of Iraq.”

Subsection (b) clarifies that funds can be used to bring home U.S. troops and to ensure that Iraq transitions to a democracy. In addition, funding would also be allocated for consultations and providing financial assistance or equipment to ensure the security of Iraq. But HR 4232 would end cut off funding to provide for the U.S. military presence on Iraqi soil.

HR 4232 is currently co-sponsored by only the following Democrats of the House (in alphabetical order):

Of the California Representatives, as you remember Rep. Barbara Lee was the only member of the House who voted NO on the War in Iraq. Rep. Lee represents the East Bay communities of Albany, Ashland, Berkeley, Castro Valley, Cherryland, Emeryville, Fairview, Oakland, and Piedmont.

On March 8, 2006, Rep. Stark rose on the House Floor in opposition to renewal of the Patriot Act and quipped: “This bill is a great example of what happens when you put Republican Senators in a room with Dick Cheney to negotiate over Constitutional rights. It’s like two foxes negotiating over who can do more damage to the henhouse without upsetting the neighbors.” Rep. Stark represents the East Bay communities of Alameda, Fremont, Hayward, Newark, Pleasanton, San Leandro, San Lorenzo, and Union City.

Regarding the electoral votes from the 2000 election, it was Rep. Maxine Waters who rose to the floor and declared: “I dedicate my objection to Ohio’s electoral votes to Mr. Michael Moore, the producer of the documentary ‘Fahrenheit 9/11’ and I thank him for educating the world on the threats to our democracy and the proceedings of this house on the acceptance of the electoral college votes for the 2000 presidential election.” Rep. Waters represents Gardena, Hawthorne, Inglewood, Los Angeles, and Lawndale.

Sups. Elsbernd and Alioto-Pier have now gained a unwanted reputation on the Board when it comes to social justice items introduced by the honorable Chris Daly. The new middle name for Elsbernd and Alioto-Pier is OBSTRUCTIONIST. Essentially the two Obstructionists have delayed the return home of U.S. service persons and thereby have contributed to endangering the lives of U.S. military personnel. Even though the Resolution will be reintroduced at next week’s Full Board, I predict Elsbernd to again obstruct justice and call for its severance from the agenda and sent to the Rules Committee. And I also predict Elsbernd and Alioto-Pier will vote NO upon the Resolutions return to the Full Board.

Notwithstanding, as with Sup. Daly’s Resolution to Impeach, I will continue to follow this item and will have detailed reports at each step of the Resolution’s legislative history.