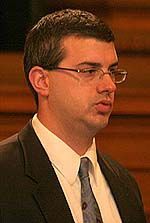 Culminating months of contentious negotiations, Supervisor Chris Daly and community leaders in his district reached an agreement with developers today over proposed Rincon Hill impact fees. The new deal calls for a total of $25 per square foot to be charged on new developments, with $11 going towards infrastructure in the neighborhood and $14 going toward a community stabilization fund. Interests ranging from big developer lobbyist Bob McCarthy to South of Market Community Action Network’s (SOMCAN’s) Chris Durazo endorsed the agreement, expressing excitement and relief that negotiations had been completed. Now, however, the deal faces one more major hurdle – receiving approval from the full Board of Supervisors.

Daly announced the deal today in a Budget and Finance Committee hearing on Rincon Hill, announcing:

“I’ve got very exciting news. As of about one hour ago, individuals with development interests in Rincon Hill and community members came to agreement on a package for development and associated mitigations [in the area].”

Daly then went over the details of the proposal, which includes an $11 per square foot fee to be placed in a Mella-Roos fund. This money would be used by the city for infrastructure and capital projects, including open space, community facilities, traffic calming, and even the development of affordable housing.

In addition, $6 million of the money from the Mello-Roos fund could be used throughout South of Market. Previously, the Planning Department had earmarked the entire fund for just the immediate Rincon Hill area.

Another $14 per square foot fee would be charged for a community stabilization fund, to go towards services helping the primarily low-income SOMA community with the displacing effects of new development there.

The $14 dollar fee would be split, with 25 cents of it being paid as soon as a permit to build was issued, and the remaining $13.75 coming 6 months after a certificate of occupancy is issued for each building.

Finally, Daly tacked on a recent proposal made by Supervisor Sophie Maxwell to force half of all new affordable housing development to be rental housing. All benefits of the plan would stay in the South of Market community, though according to Daly, in a bit larger of an area that previously proposed.

The deal comes despite previous statements by Mayor Gavin Newsom’s office that developers could only afford $20 per square foot, and that any higher sum would break the backs of potential Rincon Hill investors. Daly’s deal proves the Mayor was wrong.

“On behalf of all Rincon developers,” said Mercy,, “.this is a plan that we can all support and embrace.”

April Veneracion, a community organizer with SOMCAN, which has been extremely active in the battle over Rincon Hill, echoed Mercy’s approval of the plan.

“It’s exciting,” said Veneracion. “I think it’s an appropriate mitigation for the market-rate development in the area.”

The plan now faces board approval, where it will face a competing proposal that would spread the benefits of the fees more throughout the city. At the hearing where Daly announced the deal, Supervisor Ross Mirkarimi echoed the concerns of a variety of Supervisors that the displacing effects of development in Rincon Hill will not just hit SOMA, but citywide.

The Board will be facing the issue in the weeks to come.