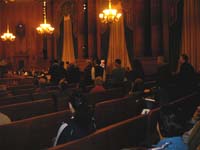 The censure would have represented a public statement of disapproval by the Board towards Daly’s conduct at a recent Land Use Committee hearing, in which Daly used profanity towards a lobbyist heckling him. Daly apologized for his behavior before the vote was taken.

The debate over the censure centered on what constituted proper public behavior for Supervisors and what steps should be taken to ensure such behavior. The Board agreed that Daly’s behavior was inappropriate, though only Alioto-Pier and fellow Newsom appointee Sean Elsbernd agreed that a censure constituted the proper way to deal with such behavior. Public testimony, however, revealed Daly’s constituency to connect his passionate words to his passion for defending their rights.

During public comment, a diverse and passionate line of primarily District 6 residents wound its way through the Board’s main chambers, as speaker after speaker spoke out against the censure. Seniors, African Americans, Chinese, tenant activists, disabled and AIDS victims from the Tenderloin and South of Market presented often emotional testimony detailing everything from Daly’s accomplishments as their Supervisor to the need for more passion in government.

“Supervisor Daly is guilty, like I am guilty, like many of the people here today are guilty,” said housing rights activist Richard Marquez. “Guilty of having the courage to stand for our convictions.guilty for believing that San Francisco is our home too.”

Beyond Chron editor Randy Shaw also spoke to the Board, drawing loud applause for his indictment of Alioto-Pier for wasting time trying to censure Daly in the face of a disastrous war in Iraq, an increasingly difficult plight for the nation’s poor people, and a budget crisis gripping the City. He also voiced his support for Daly, likening him to State Senator John Burton, who accomplished a tremendous amount for progressive causes despite being well known for his colorful language.

“I’ve worked in the Tenderloin for 25 years,” said Shaw. “And I have never seen a representative there with the kind of support Chris Daly has.”

Many speakers testified to Daly’s presence at the forefront of some of the most difficult battles occurring at City Hall. Seniors and disabled tenants, many from the Trinity Plaza, which was recently scheduled for demolition, testified to Daly’s courage in fighting to keep them from being evicted. Community activists testified to Daly’s accessibility, willingness to fight for working class tenants, and strong record of accomplishments benefiting poor and immigrant city residents.

In perhaps the most colorful testimony of the night, Residential Builders Association leader Joe O’Donoghue said of government in San Francisco, “We need people with passion, not people on Prozac and valium.” O’Donoghue stated that the United States was founded on standing up for one’s rights, and that Daly followed in that tradition. He also stated that if someone acted towards him as people had towards Daly at the Land Use Committee, he would have given them a “Belfast kiss.”

Public opposition came from a small group of individuals primarily representing downtown interests. Representatives spoke from the Golden Gate Restaurant Association (which donated heavily to Gavin Newsom’s winning campaign for mayor, resulting in the appointment of Alioto-Pier and Elsbernd to the Board) and the Hotel Council. They argued that decorum was needed on the Board, that some present at the Land Use Committee felt threatened, and that this type of behavior helped contribute to an American culture of violence seen on the streets and in video games.

Following public testimony, the Supervisors than debated the issue. Opponents raised concerns that censuring one action could lead to a slippery slope of censures for everything from swearing down to sighing. Several Supervisors also lamented Alioto-Pier chose to attempt a public censure, rather than confronting either Daly or the Board President, Matt Gonzalez, personally. They also considered Daly’s public apology as sufficient atonement for his behavior.

Supervisor Gerardo Sandoval noted that in the 228 year history of the United States Senate, only 8 members had ever been censured, the most recent of which was Senator Joseph McCarthy. In addition, Jake McGoldrick asked the last time San Francisco’s Board had issued a censure, to which the City clerk replied that records back to 1974 revealed it never had, and that records prior to this date were unavailable.

Alioto-Pier responded by saying that she felt members of the public were uncomfortable at the meeting because of Daly’s comments, beside the fact that the comments were addressed to members of the public severely berating Daly. She said Daly’s behavior reflected on all the members of the Board, and referenced a poll done by the San Francisco Chronicle of 1,400 city residents in which 80 percent supported a censure.

District 5 Supervisor-elect Ross Mirkarimi also made his voice heard at the meeting through a letter read by the Sierra Club’s John Rizzo. He voiced his opposition to the censure, stating it could prove divisive to the body and that Daly had already acknowledged his mistake.