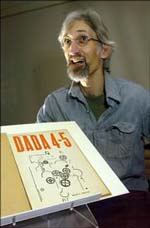 (Ed. Note: With Kansas increasingly identified as the symbol of American backwardness, we thought our readers should know about some positive trends in the state)

“Zimzim urallala zimzim urallala zimzim zanzibar zimzalla zam.” With these words—originally written early in the twentieth century by German poet Hugo Ball—Mayor Boog Highberger of Lawrence, Kansas opened the final City Commission meeting on December 27, 2005. And with random Lawrence resident Eric Farnsworth dressed in a paper suit and top hat present at the meeting to make the proclamation, International Dadaism Month was formally approved by resolution of the commission. In the land once benignly known only for Dorothy and Toto, the commission’s announcement comes at a time in which many Americans pin Kansas as the land of Intelligent Design, or the subject of Thomas Frank’s book, “What’s the matter with Kansas?” Though Highberger contends the declaration is not political—“it might be just a prank,” he laughs—some Lawrence residents suggest the decree might have a subtle, and perhaps appropriately timed undertone, given the recent focus on Kansas as a Red-state exemplar. John Pultz, an associate professor of art history at Kansas University, commented on the polarized political climate in conservative Kansas—a state divided by issues that are also raging across the United States—and said, “If any place in Kansas is going to do [this], Lawrence would be the place to do it.”

Perhaps a brief history of gibberish and babble is in order—or at least the presence of such claptrap and twaddle in the early twentieth century. Nonsense, randomness and chance characterized the art and cultural movement known as Dada, born during World War I. Artists such as Marcel Duchamp—inspired by writers like Ball or Tristan Tzara—witnessed the seemingly senseless destruction wrought by the Great War as it ravaged Europe. Horrified at nationalism, rationalism, materialism and even the cultural prostitution of fellow artists and writers, these men and women concluded that in a society that appeared chaotic, ruled by nonsense and non-meaning, the only valid response would be the creation of art and literature that was, in fact, non-art—in other words it too would have no meaning. This decision represented a serious but ironic protest about the nature of a culture that gave birth to a world war. Because they agreed only to reject all established rules of art and writing, they embraced the nonsensical almost to the point of whimsy, as evidenced in the name that arose for the movement—“Dada”—which, according to historians, sounds, appropriately, like the mindless babble that babies speak.

Seem far removed from Kansas, 2006 and the land of Intelligent Design? It may only be a “prank,” or, it may be something more than just a little end-of-the-year levity from Lawrence, Kansas—widely regarded as an odd, artistic community (or oasis, for some people) in northeast Kansas. Highberger did reveal, in fact, his intention that this proclamation, aside from adding humor to the meeting, might promote the value of an open mind, since Dada requires “a lot of interpretation” and creative thinking. An article about the declaration appearing in the Lawrence Journal-World was reprinted on the online website fark.com (a website featuring weird news from around the country). On its message board, one anonymous poster made a more blunt interpretation of the proclamation in the larger political context: “I miss Lawrence. In a state that gives us intelligent design…Lawrence is a breath of fresh air.”

The mayor added that he is interested in parallels between now and World War I-era Europe. Pultz agreed with the similar contexts, citing the sharply opposed positions regarding the war in Iraq and the debate over Darwin’s theories as examples. “It is,” he said, “almost like it is kind of an unhappy time.” In addition, Highberger—an artist himself—commented on the need to remind people that “reason and anti-reason, sense and nonsense, design and chance, consciousness and unconsciousness, belong together as necessary parts of a whole.”

And it was in that spirit that Highberger randomly selected Farnsworth to pose as Dadaist Hugo Ball (true to form, Farnsworth was chosen in part because he has no knowledge of Dada) to formalize the City Commission declaration. In further Dada fashion, the commission chose the days of International Dada “Month” by rolling a pair of dice and picking numbers from a hat. The collection of days forming this eclectic month are, officially, Feb. 4, March 28, April 1, July 15, Aug. 2, Aug. 7, Aug. 16, Aug. 26, Sept. 18, Sept. 22, Oct. 1, Oct. 17, Oct. 26.

For Kansas, the national attention this declaration has garnered is a different sort of coverage than the focus resulting from the recent adoption, for example, of Intelligent Design as part of the Kansas science standards by the state Board of Education. The New York Times featured a story on the event, as did regional newspapers in the mid-west. Kansas, however, is still Kansas. Though progressives find the news “refreshing,” many other Kansas residents, like construction worker Joe Hutchens, shake their head and call Lawrence “strange,” adding “It sounds like a waste of time to me. It seems,” he said, “like the City Commission would have something better to do than that.” For Boog Highberger, Eric Farnsworth and other Lawrencians, however, this may be exactly the kind of head-wagging they are after. And, of course, Hugo Ball would be proud. He might even shout, “Kanzabar kankan kanzaland.” Who knows? It’s Dada.