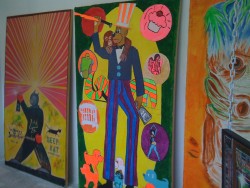 D.A. Arts is proud to present the work of the Ujima Artists Collective – four Tenderloin artists making their debut with an ecletic collection of colorful paintings. Ujima is Swahili for “collective work and responsibility,” and the four artists have brought together their diverse talents and cultures for this project. Harvey Rushing, Kenneth Beasley, and Brock Bates have worked together for four years in an art studio at Central City Hospitality House. They have teamed up with Michael Berninger, who works at the Pearl Art & Craft Supplies on Market Street. “One thing that’s very unique about us,” said Beasley, “is that we’re a multicultural band of artists. We bring all the ingredients of our artistic talents into one canvass.” Ujima will host an art gallery opening on Friday, June 12th at 6:00 pm at D.A. Arts, located in a window display gallery at 135 Sixth Street.

“I like to create images and unusual color combinations,” said Beasley. “My works feature imagery from disparate cultural sources including poverty, alternative lifestyles and an uncertain global future.” Some of Beasley’s work at the gallery include Barack Obama on Mount Rushmore (which he “took a gamble” by painting it before he was elected President), and Two Deep – a gorgeous blue mosaic that he says was inspired by the Beatles classic song Yellow Submarine. “Even the shark is on a microphone,” he laughed. “All the sea creatures in the painting are just having fun.”

“Two Deep” is the blue painting on the bottom.

But my personal favorite painting in the gallery is Flashback, a collaboration by three of the artists – Beasley, Bates and Berninger. The intricately drawn details include an homage to the Oakland murder of Oscar Grant (complete with a BART logo), as well as various graffiti drawings that were popular on the East Coast in the 1970’s. A couple paintings pay tribute to Jean Michel Basquiat, and one painting’s background has three “ghosts of past atrocities”: the Nazi Holocaust, Native American genocide, and the slavery of African-Americans.

“Flashback” is the painting on the bottom.

A lot of the paintings share a common historical and political perspective. “We all want to make a difference,” explained Beasley, “and that’s why we paint. My art teeters on – not shock, but depression. Sometimes, the truth can be depressing.”

Which I found to be an interesting viewpoint. Because while I agree that some of the paintings have a strong message about social justice, the choice of colors in my view are not depressing. In fact, I found the whole collection of paintings to be rather upbeat. Check out the art yourself, when you walk down Sixth Street by the Sunnyside Hotel – and tell us what you think.

Better yet, come to Ujima’s art display opening next Friday – and meet the four artists (who are all excited about making their debut) and ask them questions. D.A. Arts is a project of the Tenderloin Housing Clinic, to promote the work of local artists in a Sixth Street window display.