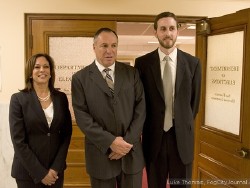 Chris Cunnie’s unexpected entry into the Sherriff’s race this week dramatically changes the contest. Absent Cunnie, Ross Mirkarimi was close to a lock to be the city’s next Sheriff. Now, Mirkarimi finds himself the underdog. He faces a politically powerful opponent who likely would have run unopposed had he not decided against running after his son’s death. Cunnie’s entry also reverberated among those hoping to be appointed to the District 5 Supervisor seat following Mirkarimi’s winning the Sheriff’s race. All the machinations and backroom deals surrounding this potential appointment are now far less relevant, with those hoping to be chosen now having to decide whether to mount campaigns for 2012 without the benefit of incumbency.

I can only imagine Ross Mirkarimi’s reaction upon hearing that Chris Cunnie was entering the sheriff’s race. One minute he was the frontrunner facing only little known Paul Miyamoto, the next minute he is facing a well-known and widely popular former Undersheriff who was previously a police officer decorated twice for valor.

Here is why Mirkarimi now faces such a tough challenge.

If the sheriff’s race were about ideology, Mirkarimi could argue that his views were more in line with most San Franciscans. This is the theme of John Avalos’ mayoral campaign, and that is typically the dominant issue, along with management experience and leadership style, in such contests.

But Chris Cunnie is not an ideologue whose views are outside the city’s mainstream. He was part of the Hennessey administration, and is not campaigning on a platform of overturning it.

Voters will not see much difference in how the two top candidates will operate the jails. What they will see is a vast difference in experience.

While Mirkarimi worked for District Attorney Terrence Hallinan and has been a leader in efforts to secure more police foot patrols, he is an outsider when it comes to the sheriff’s office. And while his campaign notes that Hennessey was an attorney who also lacked direct law enforcement experience, Hennessey was closely identified with Sheriff Richard Hongisto.

I worked on Hennessey’s 1979 campaign. His opponent, Eugene Brown, was appointed to the position after Hongisto left the city. Brown’s main campaign theme was that voters should reject the “Hongisto-Hennessey” agenda.

In other words, Hennessey was identified with the Sheriff’s office and was not seen by his opponent (or voters) as an outsider. In contrast, Mirkarimi is clearly the outsider in this race.

So we have two top candidates committed to continuing the Hennessey legacy. One has spent the last seven years on the Board of Supervisors after previously working for the District Attorney’s office. The other has been Undersheriff of the San Francisco Sheriff’s Department, Chief of Investigations under then District Attorney Kamala Harris (Harris, a very popular figure in San Francisco, attended Cunnie’s announcement ceremony), headed the office of Emergency Communications and was President of the San Francisco Police Officers Association.

Since the race will be about experience, not ideology, Mirkarimi faces a very uphill fight.
His best if not only chance depends on establishing that Cunnie has incompetently performed his prior positions, so that Mirkarimi can reframe the race as being about management skills.

In my talking to people around town, Cunnie seems to be a very popular guy. But I have not googled his history or done the opposition research that can uncover facts that alter campaigns.

While Miyamoto had little chance to beat Mirkarimi, he is running a spirited campaign. Miyamoto’s second place votes will likely go overwhelmingly for Cunnie, making Mirkarimi’s challenge even harder.

The only people as unhappy as Mirkarimi about Cunnie’s entry into the race are those who hoped to be appointed to the District 5 supervisor’s seat expected to be vacated next November. I won’t repeat the various names, or the deals allegedly cut with mayoral candidates, because it now likely appears irrelevant.

The odds now are that no District 5 candidate will have the advantage of incumbency, and that there will be many strong candidates. The next mayor will also have less influence on the outcome.

With Cunnie upending the sheriff’s race, all eyes remain on Mayor Lee’s possible entry into the mayoral contest. The August deadline is approaching, so the suspense will end soon.