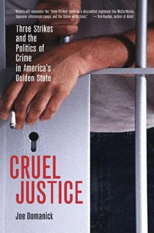 In his thoughtful, often fierce critique of California’s three strikes law, “Cruel Injustice,” Joe Domanick repeatedly refers to the law as “Kafkaesque.” It’s an apt description of a law borne out of panic and the illusion that crime and gangbanging was creeping into white, suburban America. More importantly, Domanick’s book paints a broad, historical picture of the law’s unlikely origins and its sustaining grip through both Democratic and Republican leadership.

Domanick uses Mike Reynolds as his jumping off point. Reynolds, a Fresno resident and everyday Joe, lost his daughter to a vicious murder in 1992. Domanick quotes a friend of Reynolds as saying that, after the murder, Reynolds was “going to continue to grieve and then kick some ass.” And indeed he did. Reynolds, an otherwise nondescript, middle class guy, managed to organize on a local level for the bill, helped in large part by the advent of radical conservative talk radio. With the fuel from Polly Klaas’s murder and the help of then state assemblyman Bill Jones, the three strikes law was born.

Domanick uses this for the book’s foundation, and for perhaps the most troubling aspect about the three strikes law-how the nation’s toughest three-strikes law came about in California. Domanick sees through the illusion of California as a wacky state out of touch with heartland mom and pop values. Instead, he focuses on the state’s ridiculously powerful law and order types, from the California Correctional Peace Officers Association (CCPOA) and their head honcho Don Novey, to Governors Gray Davis and Pete Wilson, both centrists feeding off the teat of big money from law enforcement.

Domanick opines that California, with its gold-rush mentality and history, on the whole isn’t the progressive bastion it’s made out to be. In fact–from the rough and tumble Fresno fields to Skid Row in Los Angeles–there has long been a tradition of stringent crime and punishment in the state.

The early to mid ’90s were the perfect breeding ground for the three strikes law, and Domanick rightly focuses not on the fact that a three strikes law for serious violent crime could be feasible, but instead on the ludicrously unjust version of the law passed at a time when media sensationalism was growing its wings. Our version of the law, as Domanick asserts, includes residential burglaries as strikes, meaning that a person could have two strikes fifteen years ago, then be busted for shoplifting batteries. In turn, you’re locked up for twenty-five to life.

Domanick also manages to strike a fine balance between the victims of true violent crime and the victims of the three strikes law. The victims of the law are often hapless junkies continually busted for breaking and entering or buying drugs on the street. Domanick deftly weaves in these stories alongside those of people such as Mike Reynolds and Marc Klaas, Polly Klaas’ father. He does draw a big distinction, however, between those two men. Whereas Reynolds channeled his rage into all out war on any criminal, Klaas eventually opposed the three strikes law and was the author of the opposition statement in the voter guide.

As Domanick also points out, Klaas himself was furious with Reynolds and Bill Jones for using his daughter’s tragic death as a vehicle for garnering support for the law. By the time Klaas was railing against the bill, Polly Klaas had become Mike Reynolds and company’s Exhibit A for why the law was needed.

“Cruel Justice” also succeeds because Domanick infuses his writing with a folksy, muckraking spirit, consistently dropping colloquial language in and out of his prose. It charges the language for most of the book, yet at other times grows annoying. His frequent dropping of hip-hop slang in the middle of his sentences can get downright silly, and at times he paints too simple of a picture of whom he sees as villains.

Domanick is at his absolute best when he illustrates small, defining moments in the buildup in the clamor for the law. He also has a natural storyteller’s eye for detail and a keen ability to gain empathy from the reader. This is best exemplified when he looks at people such as Shane Reams, a junkie and petty crook doing twenty-five years to life for allegedly being a lookout for a crack deal. Domanick’s description of Reams’ mother and infant son visiting at jail is heartbreaking. He’s able to show the plain injustice of the situation merely by what Shane and his mother do not say to each other.

In short, Joe Domanick makes no attempt to hide his disgust at the law. Nor should he. His outrage is palpable, and the book crackles with it. California is stuck with a law with harsh consequences that far too few people seem to understand. Kafka himself would have been proud-even he might not have been able to envision a society where judges have so little discretion that they can do little more than shake their heads in dismay as a grown man is put away for life for swiping a few batteries from the local store.