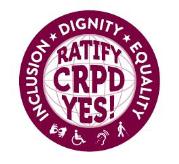 Szilvia Nyusti and Péter Takács are blind advocates in Hungary who wanted the largest bank in their country to install Talking ATMs so they could bank independently. After all, they paid the same fees as sighted customers, why shouldn’t they have the same access to banking services and technology? After a five-year legal battle in Hungary, Nyusti and Takács took their claims to the United Nations. Earlier this month, the UN Committee on the Rights of Persons with Disabilities issued an historic ruling finding that Hungary violated the UN Convention on the Rights of People with Disabilities (CRPD) by failing to ensure that Hungarian banks had Talking ATMs. While the Republican Party blocked ratification of this very same treaty in the United States in December 2012, it is great to see the treaty bringing equality to people with disabilities in countries that have recognized the treaty’s value.

A Talking ATM allows a blind person to plug a standard earphone into a jack on the machine and conduct all ATM transactions independently and privately. Look for the jack next time you visit an ATM – all the major banks in the US now have them. But it wasn’t always so. San Franciscans should have an affinity to Hungarian advocates fighting for equal rights to financial services because the very first Talking ATM in the United States was installed in San Francisco City Hall on October 1, 1999.

Shame on Senate Republicans for blocking United States ratification of the CRPD treaty. Tea Party Republicans led the charge last year, digging up arguments against the CRPD that were just plain false. Contrary to anti-treaty rhetoric, in the United States ratification will not invite international meddling and won’t change the law one iota. In fact, the CRPD is grounded in disability rights law and policy as it already exists in the U.S. (which, for example, unlike Hungary, already requires Talking ATMs). The U.S. is party to over 10,000 treaties and international agreements, through which the U.S. has strengthened its position as a global leader, not weakened it as anti-treaty Republicans wrongly claim will happen with CRPD ratification.

But the disability, human rights and veterans groups supporting the treaty’s ratification are not giving up. There is currently a national campaign to get 1000 organizations to support the treaty, and that goal is already half-way met. When the CRPD comes up for a vote next time, hopefully reason and justice will prevail… and the victory of Hungarian activists will be another reminder of the importance of this civil rights treaty.

Here’s the report on the Hungarian activists’ victory under the CRPD. (This article initially appeared on the United Nations Human Rights Website on May 16, 2013.)

The ruling of the disability rights body was made in favour of the two plaintiffs who, under article 2 of the Optional Protocol to the UN Convention on the Rights of Persons with Disabilities, put forth the “failure by [Hungary’s] authorities to eliminate discrimination on the ground of disability by a private credit institution and to ensure that persons with visual impairments have an unimpeded access to the services provided by the ATMs on the equal basis with the other clients”.

Both claimants were clients of the OTP Bank Zrt. and paid annual fees, equal to those paid by sighted clients, for banking card services and transactions. However, Nyusti and Takács were unable to use the OTP ATM machines without assistance, as the keyboards were not marked with Braille fonts, nor did they provide voice assistance.

In April 2005, the plaintiffs’ lawyer lodged an unsuccessful complaint to the OTP Bank, requesting for ATMs in the proximity of his clients’ homes to be retrofitted for their unrestricted use. Five months later, Nyusti and Takács brought a civil action to the Metropolitan Court where they asked the court to recognize that OTP was violating their right to equal treatment under the Hungarian Civil Code – in particular the Equal Treatment Act, and to request a Court order to retrofit part, if not all, of the ATMs operated by OTP across the country.

Six months later, OTP requested that the civil action be dismissed, stating that the extra services demanded by the plaintiffs would constitute positive discrimination, which could only be prescribed by law. The bank also claimed that it was primarily a governmental obligation to ensure unimpeded access to buildings for persons with disabilities and that the ATMs operated by the OTP were not “buildings”. The bank further claimed that since both contracts were concluded by the plaintiffs prior to the entry into force of the Equal Treatment Act, the latter was inapplicable to their case.

In May 2007, the Metropolitan Court ordered the OTP to retrofit within 120 days at least one of its ATMs in the capital towns of each county, one in each district of Budapest, and four further ATMs in the districts where the authors resided.

However, the plaintiffs went against this decision at the Metropolitan Court of Appeal, asserting that their activities should not be limited to the cities where the ATMs were to be made accessible following the decision of the Metropolitan Court, as they were entitled to freedom of movement and the right to choose their place of residence. They requested that all OTP ATMs be made accessible, to end the discrimination fully and not partially, arguing that the operation would not constitute a significant financial burden to the bank. The appeal was rejected.

In April 2008, the plaintiffs submitted another request, this time to the Supreme Court, hoping to have the decision by the Metropolitan Court of Appeal overturned. The OTP Bank, on the other hand, pleaded for the decision to be upheld, claiming that the contracts signed by both plaintiffs confirmed their acceptance of the conditions in which the bank’s services were provided.

Practically a year later, the Supreme Court rejected both requests, sharing the opinion of the Metropolitan Court of Appeal.

After a five-year legal battle, judging that they had exhausted all domestic remedies, Nyusti and Takács filed an individual complaint against Hungary through the UN committee in charge of protecting the rights of persons with disabilities.

The complaint sought to substantiate the failure by Hungary, through its institutions, to provide “equal and effective legal protection against discrimination on the ground of disability; reasonable accommodation; accessibility of information; right to control one’s own financial affairs.” It claimed that Nyusti and Takács had been victims of a violation of their rights under articles five, 9 and 12 of the UN Convention on the Rights of Persons with Disabilities, to which Hungary is a party.

After having considered the admissibility and the merits of the claim, the Committee concluded that Hungary had failed its treaty obligations under article 9, paragraph 2(b) of the Convention.

The Committee established that “the State party is under an obligation to remedy the lack of accessibility for the [plaintiffs] to the banking card services provided by the ATMs operated by the OTP.” It also recommended that Hungary take preventive measures against future violations by establishing minimum standards for the accessibility of banking services provided by private financial institutions for persons with visual and other types of impairments; to ensure that all newly procured ATMs and other banking services are fully accessible for persons with disabilities; and provide for appropriate training on the Convention and its Optional Protocol to judges and other judicial officials in order for them to adjudicate cases in a disability-sensitive manner.

This year marks the 20th anniversary of the World Conference on Human Rights, which led to the adoption of the Vienna Declaration and Programme of Action, and the establishment of the UN High Commissioner for Human Rights to oversee the international human rights framework, promote human rights and protect individuals against abuse.

There are ten core international human rights treaties, some of them being supplemented by optional protocols dealing with specific concerns. The Convention on the Rights of Persons with Disabilities was adopted by the United Nations General Assembly on 13 December 2006, and opened for signature on 30 March 2007. Following ratification by the 20th party, it came into force on 3 May 2008. In the past two decades, individuals have been given far more access to international and regional institutions, and are entitled to report violations and demand justice.

Lainey Feingold is a disability rights lawyer in Berkeley, California. More about her work, including 15 plus years of legal advocacy around Talking ATMs, at http://lflegal.com.