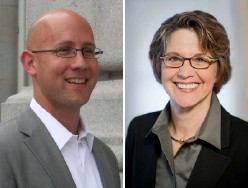 Five years ago, my Beyond Chron predecessor Casey Mills attended an endorsement vote at the San Francisco Democratic County Central Committee (DCCC.) After it ended, he said: “I’m going home to take a hot shower.” It was a corrupt body back then – and when the progressives took over two years ago, we hoped that would change. The DCCC endorsements last night may have reflected the Party’s progressive values on November ballot measures – but in the races for the Board of Supervisors, it was all about cutting deals and protecting your friends. Rafael Mandelman won the District 8 nod, but only after moderate rival Rebecca Prozan delivered State Senator Leland Yee’s vote for him – which earned her a “second choice” endorsement. In District 6, Debra Walker had enough votes from her DCCC colleagues to win – but then progressives denied Jane Kim a second-place nod. The latter was truly baffling, given how progressives have long championed ranked-choice voting. As for District 10 and all its machinations, that endorsement vote was postponed until September 8th.

Last night’s meeting – held at UNITE HERE Local 2’s office in the Tenderloin – started well, with a sign of what has changed since the DCCC got a progressive majority. Resisting pushes to rescind their prior endorsement of Michael Nava for Superior Court Judge, members re-affirmed their support for Nava – with Supervisor David Campos leading the charge.

The vote was nearly unanimous, with newly elected DCCC member Carole Migden as the lone dissenter. “When judges are doing a good job,” she said, “we should try to keep them.” Of course, the irony in the room was not lost – as Migden had made the same case for continuity while running to keep her State Senate seat. But the voters in 2008 picked Mark Leno.

But it’s easy for DCCC members to stand tall and progressive when the opposition is an oustide force – e.g., Republican judges – who do not pose a threat to their ambitions or loyalties. When it came to endorsements for Supervisor, however, progressive DCCC members proved just as vulnerable to cronyism and machine politics as anyone else.

Progressives have long been unapologetic about making a “power play” for the DCCC – because the Party’s endorsements have a huge impact on who controls City Hall. And it’s not necessarily a bad thing, if the goal is simply to elect people who share a common progressive mindset. But last night’s machinations proved that a lot more was at play.

In the District 6 race to succeed Chris Daly, there are at least two viable progressives – School Board President Jane Kim, and DCCC member Debra Walker – and probably another half dozen candidates with the same politics. And with ranked-choice voting, there is no good reason not to endorse more than one candidate. For example, in 2008 the DCCC endorsed David Chiu as #1 pick for District 3 – and Denise McCarthy as #2.

After several members gave speeches in support of their colleague Debra Walker, John Avalos’ proxy moved that the DCCC dual-endorse Walker and Kim for a “first-place” endorsement. Some argued, however, that such a move was not permissible under the by-laws. Article VI, Section 2 is subject to interpretation, so Chair Aaron Peskin said: “I’m not a lawyer, but I am the Chair,” and ruled a dual-endorsement out of order.

Walker received 18 out of 33 votes, earning the coveted “first-place” endorsement vote for District 6. The next question was whether the DCCC would make a “second-choice” recommendation – as voters could cast their ballots for up to three candidates. Some progressives, such as Eric Mar and Eric Quezada, argued that Kim should get the nod.

But too many Walker supporters were not willing to extend that courtesy. “District 6 has an amazing wealth of candidates,” explained Gabriel Haaland, “and I look forward to supporting many of them in future races. I will just not be supporting them tonight.”

This prompted Julius Turman (who as Mark Leno’s proxy voted for Theresa Sparks) to say: “we have an opportunity to look at a talented field of candidates. To say that there are good people running, but we can’t support them as a second-choice, makes no sense.”

Of course, I am not unbiased here. As a District 6 resident, I strongly considered running for Supervisor this year – and have now gotten behind Jane Kim. But the progressive machine – and yes, it is a machine – long ago anointed Debra Walker, foreclosing any reasonable chances for another progressive to get the endorsement. When I was planning to run, these insiders told me to wait my turn. But a few offered to help me get the “second-choice” slot at the DCCC. When I saw last night that they didn’t even give that to Kim, I felt punched in the stomach.

Mandelman Cuts a Deal to Get District 8 Nod

The Committee then moved to the District 8 race to succeed Bevan Dufty. As the only progressive candidate running, Rafael Mandelman had the edge. On the first round of voting, he grabbed 18 votes – one more than necessary. David Chiu, who I had heard from a few sources was a “wild card,” voted for Mandelman. But the real surprise was State Senator Leland Yee – who has endorsed Rebecca Prozan, but was the 18th vote.

Immediately after this vote, DCCC member Scott Wiener congratulated Mandelman for getting the Party’s endorsement – and said he would not be seeking the “second place” vote for the District 8 nod. “I’m running for first-place,” he said, “and I intend to win.” With Wiener out of the picture, Prozan easily secured the “second choice” endorsement.

It became clear that a deal had been struck, with one moderate politico telling me that Rebecca Prozan had “back-stabbed Scott.” Another way of putting it is Mandelman had to secure the endorsement, and Prozan delivered Leland Yee. And while it’s true that Mandelman only needed 17 votes to prevail, perhaps David Chiu didn’t want to be the 17th vote. Regardless, now progressives are going to feel beholden to Leland Yee.

And while the DCCC’s progressive majority would not give Jane Kim a second-choice endorsement, they extended that courtesy to Rebecca Prozan – who is more moderate.

The Committee recommended a “no” vote on Propositions B (Adachi Pension Proposal), F (Health Service Board Elections), H (Newsom’s Measure to Ban Local Electeds on DCCC), K (Poison Pill to Defeat Hotel Fairness Initiative), and L (the Sit/Lie Ordinance.) They voted “no endorsement” on Prop G (Elsbernd Muni Measure). And because the California Democratic Party took no position on Proposition 19 (medical cannabis tax), the DCCC overwhelmingly endorsed a “yes.”