by Tommi Avicolli-Mecca on September 7, 2007 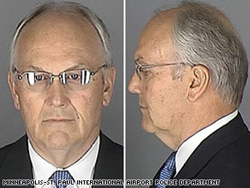 U.S. Senator Larry Craig (R-Idaho) might well have as his theme song, “Knock Three Times,” but he’s not one to be discouraged if no one answers.

The conservative Senator, who has a terrible voting record on progressive issues including gay rights and the environment, was arrested for allegedly attempting to signal men for homosexual sex in a Minneapolis airport bathroom. Craig initially pleaded guilty, but now is trying to withdraw that plea. He also originally said that he would resign from office; now he’s decided to do that only if his case is not dismissed by September 30.

Meanwhile, one of the Senate’s high-powered lawyers has asked the Ethics Committee to nix its investigation, because only misdemeanor charges were filed against him by the undercover cop on duty in the bathroom.

It couldn’t get more ridiculous.

The fact that a plainclothes cop spends his day hanging out in a public bathroom in order to catch someone tapping his foot in a stall is beyond belief. When serious crime is happening all over the country (and Minneapolis can be no exception to that rule), how does a police department justify prioritizing consensual bathroom sex over murder or robberies? Whatever happened to the fight against terrorism at airports? Guess the Minneapolis police have too much time on their hands.

It’s not that I think Larry Craig is a great legislator. He’s one of those “pro-family” types who has the backing of the Christian right thugs who want to make us all bow to their god and support their anti-sex agenda. If it were up to them, women would spend their lives being barefoot and pregnant and queers would be executed biblical style.

If Craig should be taken to task for anything, it’s for how he votes in the Senate, not whether he prefers his extramarital sex with White House interns or with the boys in the tearoom. It’s extremely hypocritical for Congressmembers who themselves are probably lurking around in the dark pursuing all sorts of fun and games to be dumping on a colleague who got caught with his eyes peering over to the next urinal rather than the newest female Congressional aide. Whatever happened to “judge not lest you be judged?”

It’s easy to dismiss the whole mess as unimportant. A non-issue. It’s not. It cuts to the heart of a basic problem in our country. President George Bush can lie to get us into an endless civil war that has so far taken countless Iraqi and thousands of American lives. He can rob us of some of our basic civil rights in the supposed name of fighting terrorism. He can deny prisoners at Guantánamo habeas corpus. He can do just about anything he wants to immigrants who come over our borders illegally.

Had he sat in a stall in some airport bathroom sliding his foot over to the next stall he would now be facing impeachment.