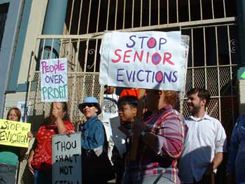 The First District Court of Appeal ruled late last week that landlords cannot litigate Ellis Act eviction cases prior to the expiration of the eviction notices. The ruling strikes down a tactic used in the vast majority of Ellis eviction cases, and affirms a lower court ruling on behalf of Vicente Rivera, an 80 year old tenant who has lived in his Mission District apartment for over forty years. It now becomes imperative for the San Francisco City Attorney’s office to join Rivera’s counsel in seeking publication of the decision.

The tenant victory in Chen v. Rivera marks the second key legal victory in the past month won by tenants defending Ellis evictions. According to Raquel Fox of the Tenderloin Housing Clinic, attorney for Rivera, this rule “will stop the bullying tactics by landlord attorneys who have tried to force people out even before their eviction notice expires.”

The basic facts are as follows.

Longtime tenant Vicente Rivera received an Ellis eviction notice after his landlord had repeatedly tried for three years to illegally force him out of his home. Fox responded to the notice by filing a lawsuit on Rivera’s behalf against the landlord for wrongful eviction.

In response to Rivera’s suit, Chen’s attorney, the Law Office of Andrew Zacks, filed a cross-claim that sought to resolve Rivera’s eviction defenses in that proceeding. This led to a series of motions and refilings that ultimately resulted in the trial court dismissing Chen’s cross-complaint.

The issue on appeal was whether a landlord can get a court ruling on the legality of their Ellis eviction even prior to the eviction notice expiring. If landlords had this right, tenants would be encouraged to vacate prior to the expiration of the one-year notice period for senior and disabled tenants, and their right to an eviction defense action-in which a jury has a role– would prove largely illusory.

The Court of Appeal rejected Zack’s tactic on the grounds that the legality of the Ellis eviction cannot be litigated until the notice expires, the tenant refuses to vacate, and a court action becomes necessary. These premature lawsuits by landlords are not “ripe” for decision, and hence were barred by the court.

Since the law office impacted by this ruling handles most of the Ellis evictions, the decision could require it to completely change its tactics. But because Rivera’s ruling was not published, no other tenant will benefit unless it becomes published and hence legally binding on all other cases.

That’s where the City Attorney’s office can help. A letter from the City Attorney, as well as other tenant attorneys, must be sent to the Court explaining the broad public impact of the ruling and requesting publication.

The San Francisco City Attorney’s office has fought vigorously in the courts to defend city laws protecting tenants, and should be counted upon to help tenants win publication.
Stay tuned to Beyond Chron for further developments in this case.