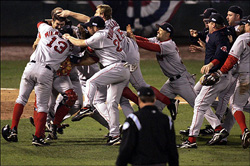 Federal Court Judge Susan Dlott issued an order yesterday effectively halting hearings challenging the eligibility of as many as 25,000 newly registered Ohio voters. The ruling came in response to a suit filed by the Ohio Democratic Party, which argued that voters should not lose eligibility simply because a letter to them was returned to sender. The vast majority of challenged voters are in heavily Democratic Cleveland, and they are disproportionately African-American.

Prior to the court’s ruling, a hearing was scheduled in Columbus today to decide voting eligibility for 2371 Franklin County voters. A similar hearing for 17,717 voters wass scheduled for this weekend at the Cleveland Convention Center.

Although Judge Dlott will not issue a final ruling in the case until Friday, Ohio law requires three days notice to challenged voters and prevents hearings from being held the day before an election. This effectively forestalls hearings regardless of the court’s ruling.

While Republicans were displeased by the court’s action, they still plan to challenge the eligibility of these newly registered voters at polling places on Tuesday. But the prospect of thousands of voters suddenly being removed from the rolls prior to November 2 is gone.

Ohio Republicans are focusing on alleged voter fraud because they are being out-organized and out-worked in a state they thought Bush would win easily . The GOP has used its control over Boards of Elections in Republican counties to engage in ridiculous witch hunts against groups registering minority voters.

Consider this: a member of the Cincinnati ACORN voter reg crew turned in 19 registrations that his supervisors felt were fraudulent. These registrations, which were never submitted, have been repeatedly cited in the media as clear example of voter fraud.

Yesterday, a local television news station did a story on the above incident in which the Board of Elections criticized ACORN for not submitting the fraudulent registrations. The Board even suggested that ACORN might have broken the law by not submitting the phony documents.

If ACORN had knowingly submitted fraudulent voter registration forms, they would likely be facing criminal prosecution. But by stopping an attempt at voter fraud and not submitting the forms, the group is still accused of wrongdoing. This is the tone of the contest in Ohio.

There will be so many observers in Ohio polling booths on November 2 that there may be little room left for voters. In core Democratic cities there will be a Republican, a Democrat, and at least one and possibly two independent poll watchers. Resolving challenges over eligibility could delay voting for hours, and don’t be surprised if violence breaks out.

Michael Moore hits Cincy—- I saw Michael Moore’s college road show at University of Cincinnati yesterday, his 48th stop on a 60-city tour to rally student behind Kerry-Edwards. I was busy recruiting campaign workers from the crowd but did hear most of his good lines.

Since the show was outside and free of charge, a delegation of Bush-Cheney supporters attended to heckle Moore. As they attacked him for opposing the Iraq war, Moore announced that he had enlistment applications with him and challenged the hecklers to enlist to fight in Iraq if they liked the war so much. They were much quieter after that.

Moore declared his support for a draft-so long as the children of Senators, Congress members and corporate presidents went first. He figured that such draft rules would pretty much guarantee that war would truly be a last resort.

I was surprised by the extremely strong support Moore gave to John Kerry. Moore’s
initial approach to the campaign was primarily anti-Bush. But I think he shares the view of many progressives who believe they have seen Kerry evolve into someone who is comfortable running a strong populist campaign.

Moore made a big point of noting that Kerry was in fact the No.1 most liberal Senator-“isn’t it great that we finally got a liberal after having to deal with all these conservative and moderate Democrats”? Moore repeated the oft-used line that Kerry could not be both a flip-flopper and the most consistently liberal Senator.

We got Moore, but Columbus and Cleveland are getting Bruce Springsteen in the campaign’s waning days. Bush is coming to the Great American Ballpark in Cincy (home of the Reds) on Sunday, where a crowd of 50,000 is expected.

Why the President would want to tie up his supporters for hours in a stadium when they could be making phone calls or walking precincts is a mystery.

October Surprise—All year politicos have been predicting an October surprise. Would it be the capture of Bin Laden? An invasion of Iran? A week long red alert?

No, it was the Red Sox winning their first World Series since 1918.

I’m sure its just a coincidence, but George W. Bush threw out the first ball at the Cardinals home opener this year.

My father-in-law attended the 1946 Red Sox-Cardinals World Series and has spent over 60 years waiting for what occurred last night. For him and everyone in Red Sox Nation, this one’s for you.